Note: This page links to Joe Morgan, the Hall of Fame player. For the former major league infielder and manager, click here. 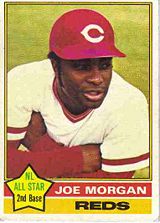 Inducted into Hall of Fame in 1990 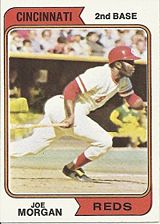 "He did it all, and he did it all the time." - Johnny Bench about Joe Morgan, referring to Joe's reputation for coming through when it mattered [1]

A fierce competitor renowned for his baseball smarts, Joe Morgan could single-handedly beat opposing teams with his multi-faceted skills. An MVP Award Winner in 1975 and 1976 while playing for the Cincinnati Reds, he was a terror on the basepaths, topping the 40-steal plateau nine times during his career. His skilled batting eye enabled him to lead the National League in on-base percentage and walks four times each. Morgan also packed considerable power into his compact frame, leading all Hall of Fame second basemen with 266 home runs, hitting 268 overall. Morgan's 27 homers in 1976 were the record for a Reds second baseman until Brandon Phillips broke it in 2007.

While most associated with the Reds, and particularly the Big Red Machine, he began his career with the Houston Colt .45s in 1963, two days after his 20th birthday, and played with Houston (renamed the Houston Astros from 1966 until 1971. He returned to Houston for one season in 1980 after leaving the Reds and helped lead them to their first division title that year. In his original stint with the club, on July 8, 1965, he collected 6 hits in a game against the Milwaukee Braves; it is still the Houston team record and has only been tied once, by George Springer on May 7, 2018 (although Springer achieved this in 9 innings). He moved to the San Francisco Giants in 1981 and almost led them to a surprise pennant in 1982. He was then part of the "Wheeze Kids" Philadelphia Phillies in 1983, reuniting with former Reds teammates Pete Rose and Tony Perez, and appearing in the postseason for the 7th time as the team made an unexpected appearance in that year's World Series. He was still a productive player even while pushing 40, thanks to his power and ability to draw walks. He closed out his career with one season with the Oakland Athletics in 1984.

Morgan was rated the #1 second baseman of all time by Bill James in his New Historical Baseball Abstract. He was elected to the Baseball Hall of Fame on January 9, 1990 by the Baseball Writers Association of America. Joe's #8 was retired by the Reds in 1987, and he was inducted to both the Cincinnati Reds Hall of Fame (1987) and Houston Astros Hall of Fame (2019, inaugural class). He was also named to the Rawlings All-Time Gold Glove Team. 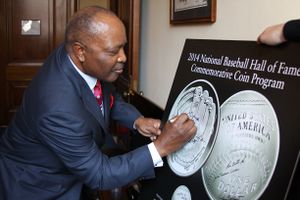 As a broadcaster on ESPN, he was paired with Jon Miller for many years (1990 to 2010) on Sunday Night Baseball broadcasts. His commentary eventually led to the creation of the popular website, firejoemorgan.com, posting regular updates on Morgan and other perceived ridiculous baseball commentary/hot takes from 2005 to 2008. After stepping down, he served as Vice Chairman of the Hall of Fame. In this capacity, he made a very public intervention the day following the release of the ballot for the 2018 Hall of Fame Election, urging BBWAA members not to vote for known PED users. He added that he was speaking for a majority of Hall members. His intervention seemed to be in reaction to alleged users Barry Bonds and Roger Clemens both obtaining over 50% of the vote for the first time during the previous year's voting.

Joe Morgan is the only player to homer twice on his 40th birthday. He was only the second player to even hit one home run on his 40th birthday, following Bob Thurman by 26 years. It was 15 years until Wade Boggs became the third to do it. On September 7, 2013, a life-size statue of Morgan in action, running the bases, was unveiled in front of Great American Ballpark in Cincinnati, in Joe's presence. He died at age 77 in October 2020, becoming the 6th Hall of Famer to die that year following Al Kaline, Tom Seaver, Lou Brock, Bob Gibson, and Whitey Ford.

"When he's healthy, he's the finest ballplayer I ever played with. He could win ballgames in more ways than anybody." Johnny Bench.