Edward Charles Ford
(The Chairman of the Board; Slick)

Whitey Ford is a Hall of Fame left-handed starting pitcher and career New York Yankee, considered by many to be the greatest Yankee hurler of all time. Dubbed "The Chairman of the Board" for his command on the mound and off, he was "was the big-game pitcher on the great Yankees teams of the 1950s and early 1960s" according to his plaque in Cooperstown.[1]. A two time 20-games winner, he was Mr. Consistency -- winning over ten games for 13 consecutive seasons.

"I don't care what the situation was, how high the stakes were -- the bases could be loaded and the pennant riding on every pitch, it never bothered Whitey Ford. He pitched his game. Cool. Craft. Nerves of steel." Mickey Mantle

Five decades after his retirement he remains one of the winningest pitchers of all time. His .690 win percentage stands highest among pitchers with 200 wins. Superb from the start, he went 9-1 as a half-season debut as a rookie in 1950 then lost two full years (1951-1952) to the Army during the Korean War. He had a winning record his first 14 seasons, posting 'W's in over two-thirds of his decisions almost every year. From 1950 to 1953, he had a string of 22 consecutive starts which were won by the Yankees; that tied the major league mark set by Carl Hubbell of the New York Giants in 1936 and 1937. No other pitcher would put together such a streak until Kris Medlen of the Atlanta Braves topped it with a longer string that lasted from 2010 to 2012; Medlen had only become a full-time big league starter in the second half of the 2012 season, a situation not entirely dissimilar from the circumstances in which Ford's streak had taken place. 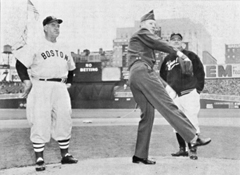 Whitey throwing out the first pitch in 1951 dressed in his Army uniform.

He also was a post-season stand-out - which in his era meant the World Series and nothing else - appearing in a record 11 Fall Classics with an ERA of 2.71. Along the way he hurled a record 33 consecutive scoreless innings to break the mark Babe Ruth had held since 1918. 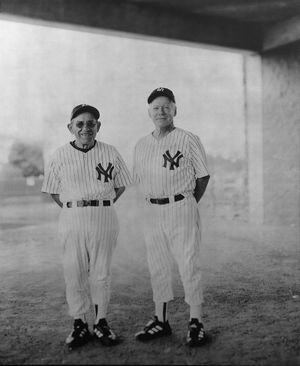 Ford was a native of New York City, and attended high school in Manhattan. Arriving in the Bigs at 21, he was the youngest player on the team. Joe DiMaggio, in his second-to-last season, was 35, and Yogi Berra was 25. Mickey Mantle, who would be a long-time teammate in later years, was 18 years old in 1950 and playing for Joplin.

Ford was not an overpowering pitcher - though in 1955 he threw two consecutive one-hitters to share the record. He was 5' 10" tall and of average build, smallish for pitchers of today's era. Instead, he had a variety of pitches that he could throw with good control, and for years was among the leaders in giving up the fewest home runs per nine innings pitched. While he never led the league in strikeouts he was capable of getting batters to miss, placing as high as second in the AL in 1961. Indeed, he was the Yankees all-time leader for strikeouts, with 1956, until passed by Andy Pettitte in 2013.

"(Ford) is always around the plate. He's so easy to catch I could do it sitting in a rocking chair." - Yogi Berra

He was a coach for the Yankees in 1968, and 1974-1975. He was elected to the Baseball Hall of Fame on January 16, 1974 by the Baseball Writers Association of America. He died in October 2020, just a few days shy of his 92nd birthday. Whitey died a week after Hall of Fame pitcher Bob Gibson did, and a little more than a month after Hall of Fame pitcher Tom Seaver. The Yankees honored him by wearing a patch with his uniform number, 16, one of many retired by the Yankees, on the left sleeve of their uniforms in 2021.

Watching Pete Rose run out every play full-speed during Spring Training he dubbed him "Charlie Hustle". Rose turned the sarcastic barb into an identity, and thrived on it.

Ford's son Eddie Ford was a shortstop in the Boston Red Sox chain and a first-round draft pick.