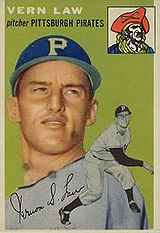 Vernon Law was a mainstay of the Pittsburgh Pirates organization from the time he signed with the club after graduating from high school in 1948. Pitching an incredible 16 seasons for the Buccos, Law won 10 or more games 9 times, and had his best overall season in 1965 at age 35, posting a 17-9 record with a stellar 2.15 ERA. And despite pitching for a poor to mediocre Pirates team throughout most of his career, he compiled more career wins than losses.

He wasn't enamored with the idea of signing with the Pirates, and had to be persuaded by Bing Crosby, a minority owner at the time, and US Senator Herman Welker of Idaho. Vern missed the 1952-1953 seasons due to military service. He was the ace of the 1960 World Champion Pirates team, winning the 1960 Cy Young Award.

Vern and his wife VaNita had 5 sons, Veldon, Veryl, Vance, Vaughn and Varlin. Vance was drafted and played for the Pirates in the majors during a decade-long career spanning the 1980s. Vern's grandson Adam Law was also drafted. Vern was among the first members of the Church of Jesus Christ of Latter-day Saints to play in the major leagues. Willie Stargell and Manny Sanguillen played with both Vern and Vance Law. Law is also a distant relative of Lance Beus.

After his playing career ended, Law was a Pittsburgh Pirates coach in 1968 and 1969. He was an assistant coach at Brigham Young University from 1969 to 1979 and later went to Japan to coach the Seibu Lions from 1979 to 1981. Law was pitching coach of the Portland Beavers in 1982 and moved to the Chicago White Sox organization as pitching coach of the Denver Bears in 1983 and manager of the Denver Zephyrs in the American Association in 1984 until being fired on July 3rd. He was replaced as manager of the Zephyrs by Adrian Garrett.