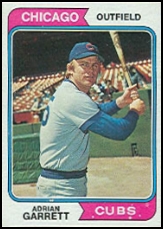 The older brother of Wayne Garrett, Jimmy Garrett and father of Jason Garrett, Adrian 'Smokey' Garrett played in Japan for the Hiroshima Carp from 1977 to 1979, hitting 102 home runs in just three years while helping the Carp to victory in the 1979 Nippon Series. In addition to his 3 years in Japan, Adrian spent time in the Major Leagues with the Atlanta Braves, Chicago Cubs, Oakland A's and California Angels. Beginning in 1961 and continuing through 1979, Adrian's professional career as a player spanned 19 years. Overall, his career as a player, manager, coordinator and coach has spanned 50+ years (1961-2015).

In 1973, after being invited to spring training as a non-roster invitee of the Cubs, Adrian won a spot on the opening day roster as a pinch-hitter, outfielder and emergency catcher. He appeared in 36 games for Whitey Lockman and the Cubs in 1973; 24 as a pinch-hitter (where he hit .286 and slugged 1 of the Cubs 2 pinch-hit homers), 6 as a catcher and 6 in the outfield. Adrian started out slowly in 1973, but ended the season on a roll. For the last 3 months of the season, Adrian batted .333 for the Cubs. In 1974, once again Adrian made the Cubs opening day roster. He appeared in 10 games for the Cubs and had no hits in 8 at bats. After being sent down to Triple-A Wichita Adrian proceeded to lead the American Association in homers with 26 round trippers in a mere 92 games and drove in 83 runs with only 89 hits.

Adrian began the 1975 season with the Chicago Cubs organization. It was in San Diego on Sunday, May 18 when he had a memorable game against Dave Winfield and the San Diego Padres. Adrian was playing first base and batting fifth in the lineup that day. The game was scoreless when Adrian came up to bat in the 6th inning. Rick Monday had walked and moved to second base when Champ Summers reached first on an error by Padres starting pitcher Dan Spillner. With two on and one out, Adrian came to the plate and promptly slammed a 3-run homer, driving in all of the Cubs runs in their 3 to 0 victory that afternoon.

On July 31, 1975, Adrian's contract was purchased by the California Angels. In California, Adrian was reunited with his old skipper from the Oakland A's, Hall of Famer Dick Williams. Williams immediately put Adrian into the lineup and the results were spectacular. Over his first seven games with the Angels, he batted .391, had an on base percentage of .440, a slugging percentage of .739, hit two home runs and drove in eight runs. For the entire month of August, 1975, his stats were solid once again. Appearing in 20 games, he batted .269 with 18 hits, two doubles, four home runs, twelve rbi's, 33 total bases, an on base percentage of .338, and a .493 slugging percentage.

1975 proved to be Adrian's best chance to play regularly in the big leagues. Playing in a total of 37 games for the Halos, Adrian hit a respectable .262 with 6 home runs and had a slugging percentage of .477. If he would have had enough at bats, he would have led the Angels in the following categories: Slugging Percentage (.477), On Base + Slugging (OPS) (.821), Home Run Frequency (17.8) and OPS+ (138). Projected over a full season, Garrett's statistics could have looked something like this: 28 home runs, 84 runs driven in, 52 extra base hits, 239 Total Bases, 66 Bases on Ball and 131 Strikeouts. All of these projected statistics, with the exception of Bases on Ball, would have led the Angels in 1975. The Bases on Ball total would have tied him for the team lead with Jerry Remy.

On September 6 in Anaheim, the Angels hosted George Brett and the Kansas City Royals for a double header. Game 2 saw Adrian batting clean up and being penciled in as the Designated Hitter. The Angels went down to defeat this particular afternoon 6 to 3, but not before Adrian did his best to lead the team to victory. His totals for game two: two for three at the plate, (including a double and a home run), a sacrifice fly, six total bases and he drove in all three of the Angels runs.

Another one of Adrian's highlights during the 1975 season occurred on September 22 at Anaheim Stadium against the Chicago White Sox. The match up started with Frank Tanana taking the mound for the Angels, and Jim Kaat starting for the White Sox. Smokey entered the scoreless game in the bottom of the 16th inning as a pinch hitter for Paul Dade. Facing 9-time All-Star reliever and Hall of Famer Goose Gossage, Garrett worked the count to 2 and 1 before hitting a 3 run walk off homer to win the game and drive in all of the runs for the Angels. According to research by ESPN and MLB Network, it was also just the fourth game-ending home run in a scoreless game in the 15th inning or later in the history of baseball. Adrian joined Willie Mays (Giants, July 2, 1963), Earl Averill (Indians, Aug. 24, 1935) and Old Hoss Radbourn (Grays, Aug. 17, 1882) in the select quartet. This select group expanded by one on Aug. 7, 2009, becoming a quintet, when Alex Rodriguez homered off of Boston's Junichi Tazawa, driving in the only runs of the night and lifting New York to victory in the bottom of the 15th inning.

For the entire 1975 season, combining his time at Triple-A, the National League and the American League, Adrian hit a total of 19 home runs in a mere 340 at bats, a frequency of 1 home run every 17.9 at bats. His combined batting average was .288 and his slugging percentage was .538. His Isolated Power rating of .203 underlined his ability to hit for extra bases and drive in runs. Adrian drove in 24 runs (in the Major Leagues) with only 30 hits in 1975. After his brief, yet productive, stint with the Angels in 1975, he was called "the Angels' most explosive hitter" in the Angels 1976 media guide.

The 1976 Angels upgraded their offensive fire power by acquiring veterans Bobby Bonds and Bill Melton. This resulted in fewer opportunities for Adrian. In 1976, he appeared in 29 games for the Angels, spending time as a Pinch Hitter, at First Base, Designated Hitter and at Catcher. Catching for the Angels gave Adrian the opportunity to work with some outstanding pitchers including Hall of Famer Nolan Ryan, Jim Brewer and Frank Tanana.

After leaving the Major Leagues, Adrian played 3 seasons in Japan for the Hiroshima Carp (1977 through 1979). During his stay in Japan, once again his statistics were solid: 102 Home Runs, 247 rbi's, .260 batting average, .536 slugging percentage, .355 on base percentage, an OPS of .881, an Isolated Power rating of .276 and a round tripper every 12.8 at bats. One of Adrian's teammates in Japan was former New York Yankee Jim Lyttle. In 1978, Adrian began the season on fire. In the month of April, he hit 15 home runs to tie the league record. He was then voted to the All Star game where he hit 3 home runs (the first player to ever do so) and was voted the games Most Valuable Player. Adrian finished the 1978 season with 40 home runs, only the 5th foreigner in the history of the league to hit 40 or more dingers in one season. In 1978, the Hiroshima Toyo Carp (led by Adrian, Jim Lyttle, Koji Yamamoto and Sachio Kinugasa), became the first Japanese team in history to hit 200 home runs in 1 season. These four players , who slugged over 1,600 home runs during their professional careers, formed the nucleus of the famous Akaheru Lineup, (literally meaning "Red Helmet" Lineup). In 1979, Adrian, Jim and the Carp defeated Charlie Manuel and the Kintetsu Buffaloes to win the 1979 Nippon Series.

1982 to Present: Managing and Coaching[edit]

After retiring as a player, Adrian began a new career as a minor league manager. In his first post as manager of the Midwest League Appleton Foxes in 1982, the team won the Midwest League championship. Next it was on to the AA Glens Falls White Sox in 1983, and the Triple-A Denver Zephyrs in 1984. In 1985, Garrett served as Minor League Hitting Instructor for the Chicago White Sox organization. While with the White Sox organization, Adrian helped to develop the talents of Daryl Boston, Joel Skinner, Ron Karkovice, Russ Morman and Tim Hulett just to name a few future Major Leaguers. In 1987, he served as a coach for the Triple-A Omaha Royals, mentoring first-time manager and future Royals skipper John Wathan. Garrett joined the Kansas City Royals coaching staff in 1988 as their third base coach. He served as the team's hitting coach in 1991 and 1992. He also worked for the Florida Marlins as hitting coach at Triple-A Edmonton (1993-1994) and Triple-A Charlotte (1995-1998), under managers Sal Rende, Carlos Tosca and Fredi Gonzalez. Next he served as the Hitting Coordinator for the Marlins from 1999-2001. Cliff Floyd and Preston Wilson are just a couple of players that Garrett helped in their development during his time as Hitting Coordinator for the Marlins. In 2011, Adrian completed his ninth season in the Cincinnati Reds organization, all as the Hitting Coach for the Triple-A Louisville Bats. Players who have benefited from Garrett's tutelage include: Jay Bruce, Chris Dickerson, Jerry Hairston, Chris Heisey, Jeff Keppinger, Corey Patterson, Drew Stubbs and Joey Votto (who was named the International League Rookie of the Year for 2007 and hit a home run for his first major league hit on September 5th, 2007). Adrian returned to Louisville in 2011 for his ninth consecutive and final year as Hitting Coach for the Triple-A Bats. From 2012 through 2015, Adrian served as a part time spring training, instructional league and regular season instructor for the Reds organization. At the end of the 2015 season, Adrian "Smokey" Garrett, called it a career and retired, ending a professional baseball career that spanned almost 55 years and began when Ted Williams was still active and Ty Cobb was still alive.

Originally from Brooksville, FL, Adrian spent the majority of his childhood in Sarasota, FL where his brother Wayne and several other family members still reside. He and his wife Linda now reside in the Austin, TX metro area. The couple will celebrate 50 years of marriage in 2018.