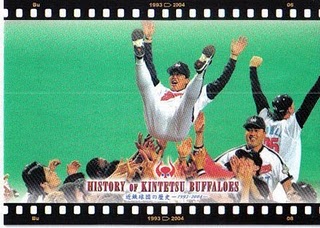 The least successful team in the history of the Pacific League, the Kintetsu Buffaloes began as the Kintetsu Pearls in the Pacific League's inaugural 1950 season. In 1959, the name was changed to Kintetsu Buffalo in honor of new manager Shigeru Chiba's nickname. In 1961 they lost a Japan-record 103 games and changed their name to the Buffaloes following the season. It wasn't until their 30th season (1979) that they wound up atop the six-team league and they lost all four Japan Series that they appeared in, the first three all in seven games. In the early 1990s, Hideo Nomo had four dominating seasons on the mound while pitching for Kintetsu, leading the Pacific League in wins and strikeouts every year from 1990 to 1993, adding the ERA crown and the Sawamura Award the first year. In 1999, the team added Osaka to their name becoming the Osaka Kintetsu Buffaloes for the remainder of their existence. In their last pennant-winning season, the team saw Tuffy Rhodes and Norihiro Nakamura set a new record for home runs by two teammates but they still dropped the Japan Series, 4 games to 1, to the Yakult Swallows.

The Buffaloes played their last season in 2004, after which they merged with the Orix Blue Wave to form the Orix Buffaloes; a couple of Kintetsu's better players (ace pitcher Hisashi Iwakuma and top 2004 home run hitter Koichi Isobe) refused to play for the merged team and after some legal wrangles wound up with the expansion Rakuten Golden Eagles instead. Additionally, fading star Nakamura signed with the Los Angeles Dodgers.

At the time of the merger, Kintetsu was the only franchise in Nippon Pro Baseball to have failed to win a Japan Series.