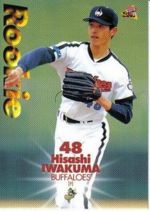 Hisashi Iwakuma has won the Sawamura Award and starred on the international stage and in the US. He is the son-in-law of Koju Hirohashi.

Iwakuma was the 5th-round pick of the Kintetsu Buffaloes in 2000. Spending most of his rookie year in the minors, he joined the team's rotation in '02, going 8-7 with a 3.69 ERA. In 2003 Iwakuma established himself as Kintetsu's ace, going 15-10 with a 3.45 ERA. He was sixth in the Pacific League in ERA and fourth in wins despite playing on a fifth-place team. Iwakuma did even better in '04, with a 15-2, 3.01 season. He led the PL in wins, was second to Daisuke Matsuzaka in ERA and didn't suffer a defeat till after the All-Star Game (starting off the year 12-0). The rest of the Kintetsu staff went 46-68 during the year.

Iwakuma received even more fame after the 2004 season. When the Buffaloes announced a merger with the Orix Blue Wave, Kintetsu's ace said he would not play for the new team. The merged Orix Buffaloes selected him in a draft of the former Buffalo and Blue Wave players, but Iwakuma continued his refusals. The usually-docile players' union threw their weight behind Iwakuma and the Buffaloes relented, letting Iwakuma go to the expansion Rakuten Golden Eagles instead.

Iwakuma's first season with Rakuten paled statistically in comparison with his last Kintetsu season. He was clearly the ace of the new squad though - his 4.99 ERA was the best by a starter and his 9-15 record gave him more wins than the next two pitchers combined. He also threw half of the team's 18 complete games. Hisashi did not pitch much in 2006, going 1-2 with a 3.72 ERA in six games. Shoulder injuries and new rules about pitch deliveries limited his effectiveness and playing time.

Iwakuma went 5-5 with a 3.40 ERA in 2007. After his three ineffective seasons from 2005-2007, Iwakuma turned things around in a big way in 2008. He went 21-4 with a 1.87 ERA. He edged Yu Darvish by .01 for the PL lead in ERA, led the league in innings (201 2/3), was third with 159 strikeouts (trailing Toshiya Sugiuchi and Darvish) and tied for second with two shutouts. That earned him Pacific League MVP honors. He became just the third MVP in Nippon Pro Baseball history from a 5th-place team, following Hiromitsu Ochiai (1982) and Hiromitsu Kadota (1988. Iwakuma also won the Sawamura Award as the best pitcher in Japan. No one had won 21 games in a NPB season since Yoshinori Sato in 1985.

Iwakuma pitched for the Japanese national team in the 2009 World Baseball Classic. He went 1-1 with a 1.35 ERA, allowing only 12 hits in 20 innings while striking out 15. He lost a 1-0 duel to Jung-keun Bong of South Korea, giving up a 4th-inning run on a walk to Jong-wook Lee and hits by Keun-woo Jeong and Tae-kyun Kim. He tossed a scoreless 7th inning in a win over Cuba. Iwakuma started the second game against Cuba, a make-or-break game; he tossed only 69 pitches in six shutout innings before Toshiya Sugiuchi completed the whitewash. It was the earliest Cuba had ever been eliminated from a major baseball tournament. Iwakuma then got the call from Tatsunori Hara to start the finale against South Korea. He allowed only one run in the first 7 innings (a homer by Shin-soo Choo) before giving up a second score in the 8th; he left with a 3-2 lead but Yu Darvish blew the save. Japan went on to win in the 10th. Iwakuma led the tournament in innings (20) and was second to Darvish in strikeouts. He made the All-Tournament team alongside fellow pitchers Daisuke Matsuzaka and Bong. Matsuzaka beat him out for MVP honors, but said that Iwakuma deserved them more. 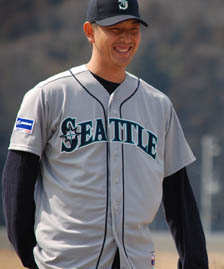 Following the 2010 season, Iwakuma's name was placed on the posting system by the Golden Eagles. The Oakland Athletics posted the highest bid to secure the right to negotiate a major league contract with him. Iwakuma turned down a 4-year, $15,250,000 offer from Oakland and opted to remain with Rakuten. He missed part of the season with a shoulder injury, being sidelined from May 18th to July 26th. He had been 3-2, 1.72 in 6 starts before the injury, and went 3-5, 2.87 after his return. He became a free agent after the season, and this time truly made the jump across the Pacific Ocean, signing with the Seattle Mariners. Surprisingly, he only agreed to a one-year contract worth $1.5 million, with potential performance bonuses of $3.4 million, much less than what he had turned down a year earlier. However, he explained that having a good relationship with a team - something he had not felt with Oakland - was more important than the money. He added that he and his family had taken an immediate liking to the city of Seattle and that he was looking forward to being a teammate of the great Ichiro Suzuki.

Iwakuma's time in the major leagues did not start off well. He pitched poorly during the Mariners' spring training in 2012, forcing the hand of manager Eric Wedge who announced he would not be part of the team's starting rotation to start the season. The plan was to use him in the bullpen to allow him to build back strength in his shoulder. Thus, he was on the M's special 28-man roster for their season-opening series against the Oakland Athletics in his native Japan, but in one of three spots designated as being ineligible to play during the Series, even though he made the trip across the Pacific Ocean. It took him until April 20th to make his debut, when he pitched four innings in relief of Hector Noesi and Erasmo Ramirez in a game against the Chicago White Sox. He was outstanding, only giving up a single hit during his stint; it was a solo homer by Adam Dunn, although it made little difference in the final 7-3 score in favor of the White Sox. He was the last player from all 30 teams' opening day rosters to make his season debut. He won his first game as a starter on July 30th, beating the Toronto Blue Jays, 4-1. In that game, he set a Mariners rookie record with 13 strikeouts, after surrendering a leadoff homer to Rajai Davis to start the game. He settled down nicely after that rough start, giving up no more runs in completing 8 innings, before turning the ball to Josh Kinney. He had been inserted in the starting rotation just before the All-Star break, but had had to fly back to Japan to be at the side of his ill father only a few days before. He ended the season with a record of 9-5, 3.16, in 30 games, with 16 starts, pitching 125 1/3 innings and striking out 101.

Iwakuma started the 2013 season as one of the best pitchers in the major leagues, placing his name among the ERA leaders from the start. He had a scoreless string of 23 2/3 innings in June, only broken by an unearned run allowed to the Houston Astros on June 10th, in a game he won, 3-2. That win improved his record to 7-1 and lowered his ERA to 1.79, trailing only Clay Buchholz's 1.71 at that point of the season. He finished the year at a very solid 14-6, 2.66 with a 1.01 WHIP and 185 K in 219 2/3 IP. He was chosen for the 2013 All-Star Game but did not play due to the Sunday starter rule; Chris Tillman replaced him. He finished among the 2013 AL leaders in ERA (3rd behind Anibal Sanchez and Bartolo Colon), wins (tied for 8th), WHIP (2nd to Max Scherzer), fewest hits per 9 IP (4th behind fellow ex-PL star Darvish, Scherzer and Justin Masterson), fewest walks per 9 (3rd behind David Price and Colon), innings (3rd behind James Shields and R.A. Dickey) and ERA+ (138, 6th, between Chris Sale and Shields). He was third in voting for the 2013 AL Cy Young Award, behind Scherzer and Darvish.

Preparing for spring training in 2014, Iwakuma injured a finger while working out in southern California in January. He showed up in camp wearing a splint due to a strained tendon and had to lay off throwing for a month. The Mariners then announced that as a result, he would not be ready for the start of the season. As a result, he only made his first start on May 3rd, then had back-to-back starts of 8 innings without allowing a run in his second and third outings of the season. After a couple of games in which he was touched for 9 runs in 15 innings and suffered two losses, he bounced back with a gem on June 4th when he shut out the Atlanta Braves for seven innings, combining with two relievers for a 2-0 win. He ended the season with an excellent record of 15-9, 3.52 in 28 starts, and 154 Ks in 179 innings. He tied for 8th in the 2014 AL in wins, was 4th in WHIP (behind teammate Felix Hernandez, Sale and Garrett Richards), was second in walk rate (behind Phil Hughes) and was second in K:BB ratio (also behind Hughes).The Mariners were hoping to take a step forward in 2015 and were counting on Hisashi as one of the team's pillars, but after making only three starts in April, with a record of 0-1 and a 6.61 ERA, he went on the disabled list and was out until July 6th. he was roughed up in his first start back, allowing 5 runs in as many innings to the Detroit Tigers, increasing his ERA to 7.17, but then began pitching well after that. On August 12th, he threw a no-hitter against the Baltimore Orioles, allowing 3 walks and striking out 7, in what was the first complete game and shutout of his big league career. The Mariners won the game, 3-0, as he improved to 4-2 on the year and lowered his ERA to 3.86. He was the second Japanese-born pitcher to throw a no-hitter, after Hideo Nomo. He finished the season with a record of 9-5, 3.54 in 20 starts, logging 129 2/3 innings.

Iwakuma became a free agent after the 2015 season and was sought after by the Los Angeles Dodgers, who were looking to strengthen their starting rotation following the departure of co-ace Zack Greinke through free agency. The two sides came to a preliminary agreement on a three-year contract worth $45 million, but after two weeks of intense negotiations, they were unable to agree on the final details of the deal and the Mariners took advantage of the snag to scoop him up back into the fold, inking him on December 17th to a guaranteed one-year contract with two option years. So back he went to Seattle in 2016, but he started off slowly as by mid-May, he was only 1-4 with a 4.38 ERA in 8 starts. However, he won his last three starts of the month, then after going 2-2 in his first four June starts, began a tremendous streak on June 28th, when he beat the Pittsburgh Pirates, 5-2. Starting with that game, he won 7 of 8 starts, topped off with a 3-0 win over the Detroit Tigers on August 8th in which he tossed 7 shutout innings. The streak improved his record to 13-7 while lowering his ERA to 3.79. He ended the season at 16-12, 4.12.

In 2017, Iwakuma was set back by injuries and made only 6 starts, going 0-2, 4.35. He underwent major shoulder surgery in September and as a result missed all of 2018 after some setbacks while rehabbing in the minors. At 37, there was some question as to whether he would try to make a comeback. He stated that September that he would likely pursue his career back in Japan.

In 2021, he returned to the Mariners as a special assignment coach.