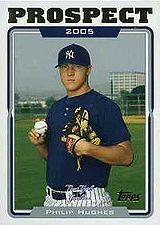 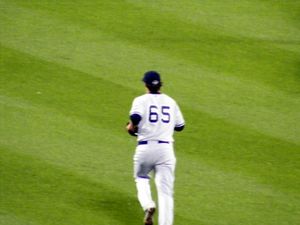 Philip Hughes was 9-1 with a 0.69 ERA as a high school senior, walking only 3 and striking out 83 in 61 innings. He was chosen to Baseball America's All-American high school team. The New York Yankees took him with the 23rd pick in the first round of the 2004 amateur draft. He was signed by scout Jeff Patterson for a $1.4 million bonus. He made three starts for the GCL Yankees that year, only throwing a total of five innings, striking out eight with no walks.

Hughes' first year as a full-time professional player came in 2005, when the right-hander went 2-0 with a 3.06 ERA for the Tampa Yankees, holding opponents to a 1.40 average, and he was 7-1 with a 1.97 ERA for the Charleston RiverDogs, allowing only a .192 average, 2.10 BB/9 and striking out 9.44 batters per 9 innings. Hampered by tendonitis and a tired arm, he didn't even reach 100 innings, but Baseball America still named him the Yankee minor league player of the year. The publication also rated him the #6 prospect in the South Atlantic League.

In 2006, Philip was 2-3 with a 1.80 ERA for Tampa and 10-3 with a 2.25 ERA for the Trenton Thunder. He pitched in the 2006 Futures Game, but was bombed for three runs in one inning of work, giving up a RBI double to Wladimir Balentien followed by a 2-run homer to George Kottaras. Hughes tied for the 10th lowest ERA (2.16) in the US-based minors that year and tied Matt Garza for the second-lowest average allowed by a minor league starter (.179). Baseball America rated him the best pitching prospect and most exciting player in the Eastern League and as possessing the best breaking pitch.

Hughes made his major league debut on April 26, 2007, in a losing effort against the Toronto Blue Jays at a time when the Yankee starting rotation was decimated by injuries. Hughes was the youngest player in the 2007 AL at the time of his debut, in which he allowed 7 hits and 4 runs in 4 1/3 IP. He was the third Yankees starting pitcher to make his MLB debut in the season's first 20 games, following Kei Igawa and Chase Wright; it had been 52 years since another team had done that - the 1955 Cardinals with Larry Jackson, Luis Arroyo and Floyd Wooldridge. In his second start, against the Texas Rangers on May 1, he pitched 6 1/3 hitless innings but was forced to leave the game because of a pulled groin muscle and was placed on the disabled list after the game. He did earn his first major league victory though, as the Yankees finished with a 2-hit 10-1 victory. He came back in July with the Tampa Yankees. In his first rehab stint, he allowed one unearned run in two innings, walking two, allowing no hits and striking out three. He was back in the American League shortly afterwards. He finished his first season with a 5-3 record and a 4.46 ERA in 13 starts. He also made two relief appearances in the ALDS, pitching 5 2/3 innings, allowing only one run and earning a win as the Yankees bowed out to the Cleveland Indians.

In 2008, he fought health problems all season, making only 8 starts in the majors, and going 0-4 with a 6.62 ERA. He was back in the Yankees' starting rotation to begin the 2009 season, but after seven starts was moved to the bullpen because the team's relievers were regularly taking a beating and had trouble adjusting to the hitter-friendly New Yankee Stadium. After a few solid outings, Hughes was installed as the 8th-inning set-up man for Mariano Rivera and thrived in the role. He was 8-3 with a 3.03 ERA and 3 saves, pitching 86 innings and striking out 96 batters while walking 28. He did not fare so well in the postseason, being hit hard in both the ALDS and World Series, and pitching better but still being chraged with a loss in the ALCS against the Los Angeles Angels. Still, the Yankees defeated the Philadelphia Phillies in the Fall Classic and Hughes earned a championship ring.

After the Championship season, there was uncertainty about what Hughes's role would be in 2010 - starter or reliever. Manager Joe Girardi decided to return him to the starting rotation and the move payed dividends. With A.J. Burnett struggling, Hughes became the Yanks' third starter behind CC Sabathia and Andy Pettitte and was a big winner, going 18-8 in 29 starts with a 4.18 ERA. He had a great first half, going 11-2, 3.65 and was named to the All-Star team, but slowed down noticeably in the second half (7-6, 4.90). He won the first postseason start of his career with seven scoreless innings against the Minnesota Twins in the ALDS, but was hit hard by the Texas Rangers in the ALCS: he lost both of his starts, giving up 11 runs in 8 2/3 innings.

Hughes started the 2011 season on the wrong foot, giving up 5 or more runs in each of his first three starts. On April 15, he was placed on the disabled list with a "dead arm" with his ERA standing at 13.94 and the velocity on his fastball noticeably down. Veteran Bartolo Colon, who had succeeded him on the mound in all three of his starts and pitched much better than him, took his place in the Yankee starting rotation. Hughes was scheduled to begin a rehabilitation assignment in the minors in late April, but throwing sessions on the sidelines were unimpressive, as his velocity was still well down; unable to pinpoint the source of the problem, the Yankees' trainers cancelled the assignment and had him undergo an MRI instead. Doctors feared that the cause of his problems was a rare blood disorder that could explain his lack of arm strength and of feeling, but tests came back negative for circulatory or vascular problems. That left the Yankees still puzzled about the source of his problems, but with no alternative other than have him return to the mound after some rest. Hughes made a first rehab start on June 19th for the Staten Island Yankees of the New York-Penn League. He pitched 4 1/3 innings against the Brooklyn Cyclones. After their game of July 3rd, the Yankees sent down rookie Ivan Nova, owner of an 8-4 record as a starter all season, down to AAA to make room for Hughes in the starting rotation. He finally picked up his first major league win of the season on July 17th, beating the Toronto Blue Jays, 7-2, and pitching six effective innings. He had an immediate relapse of his early season trouble in his next start, however, as he gave up 7 runs on 9 hits and 4 walks in 4 1/3 innings against the Texas Rangers on July 22nd. Thus, even though the Yankees had scored 9 runs for him in the 3rd inning, he had to leave the game with a no-decision, with rookie Hector Noesi replacing him to pick up the win. Just as the Yankees were beginning to wonder whether everything was right with the young righty, he turned out his best game of the season, shutting out the White Sox, 6-0, in a rain-shortened start on August 2nd. He ended the year with a record of 16-13, 4.23 in 32 games, having pitched a career-high 191 1/3 innings, and notching 165 strikeout, also a personal best. He was solid in a Game 4 start against the Baltimore Orioles in the ALDS on October 11th, giving up only one run in 6 2/3 innings. However, he left Game 3 of the ALCS after only three innings on October 16th, complaining of a stiff back, trailing 1-0; he was charged with the loss as the Yankees went on to lose the game, 2-1, on their way to being swept by the Detroit Tigers.

There were more health concerns about Hughes at the start of spring training in 2013, as the back pain, caused by a bulging disk, had not abated. he was unable to take his regular turn on the mound and there were concerns that he would need to start the season on the disabled list. Those concerns were confirmed on March 27th, when the Yankees placed his name on the disabled list, although he was only expected to miss one or two turns on the mound. Indeed, he made his first start against the Tigers on April 6th, but he gave up 8 hits and 4 runs in 4 innings in an 8-4 loss. It was the start of a difficult season, in which his record was only 4-14 with a 5.19 ERA in 30 games, including 29 starts. He pitched only 145 2/3 innings, a reflection of his inability to pitch deep into games. He became a free agent after the season and on November 30th, reports indicated that he had signed a three-year contract with the Minnesota Twins worth $24 million, pending a physical.

Hughes had a tremendous comeback season for the Twins in 2014, as he finished the year with a record of 16-10. He earned bonuses of $250,000 each under the terms of his contract by pitching 180 and 190 innings, but barely missed an additional $500,00 bonus as he fell one out short of reaching 210 innings. Even more frustrating, it was a rain delay that cost him the bonus: he was cruising along against the Arizona Diamondbacks in his final start of the year on September 24th when a 66-minute rain delay in the top of the 9th meant he could not come out to pitch the 9th with a 2-1 lead. The Twins offered him an opportunity to make a relief outing during the team's last series in order to get the final out required to reach 210 innings, but he turned it down, not wanting to make just a token appearance for the sake of the bonus. He ended up setting a major league record that year, however, as he posted the best K/bb ratio ever, with 186 strikeouts and only 16 walks, for a ratio of 11.63, topping the previous mark of 11.00 set by Bret Saberhagen with the 1994 New York Mets. Both his innings pitched and strikeout totals were personal bests, and his ERA of 3.52 was his best as a starter.

Following his outstanding 2014 season, Hughes signed a five-year contract extension with the Twins on December 22nd, worth $58 million. He could not duplicate the previous year's success in 2015, however, as he went 11-9, 4.40 in 27 games (25 starts). In spite of pitching only 155 1/3 innings, he led the American League with 29 home runs allowed. He followed that with an injury-plagued season in 2016. He was 1-7, 5.95 in 12 games when on June 9th, he fractured his femur after being hit by a ball off the bat of the Miami Marlins' J.T. Realmuto. He was expected to miss at least two months, but only a few weeks later the Twins announced that his season was over as he needed to undergo surgery to relieve thoracic outlet syndrome as well. He was reportedly already feeling discomfort before the injury, and the surgery involved the removal of a rib which was putting pressure on the nerves in his right shoulder. He had another abbreviated and disappointing season in 2017, going 4-3, 5.87 in 14 games, including 9 starts. He suffered from shoulder discomfort, then had to undergo another surgical procedure for thoracic outlet syndrome. He allowed 72 hits in 53 2/3 innings. He was back briefly in 2018, making 7 appearances and 2 starts with no decisions. In 12 innings, his ERA was 6.75. On May 21st, the Twins had him designated for assignment, an expensive decision as they were still on the hook for around $25 million in salary, but management figured there was little chance of his ever being a contributor to team success again. However, they did manage to find a taker for Hughes, sending him to the San Diego Padres on May 27th along with the 74th pick in the 2018 amateur draft in return for a low-level prospect, C Janigson Villalobos. In spite of the trade, the Twins remained on the hook for most of the salary still owed Hughes, however. Hughes' struggles continued with the Padres as he pitched to a 6.10 ERA in 20 2/3 innings before the Padres had him designated for assignment on August 10th and then released him on August 16th. After not pitching in the 2019 and 2020 seasons, Hughes made his retirement from baseball official on January 3, 2021.