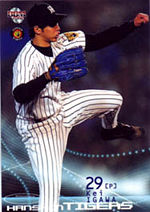 Southpaw pitcher Kei Igawa had an 18-strikeout perfect game in high school and was scouted by the New York Mets during his amateur days. He suffered from back problems his senior year, which limited his baseball activities. He was the number two draft choice of the Hanshin Tigers in 1997. He spent his early years in ni-gun and set a Western League record with four wild pitches in one game. With Hanshin's staff in tatters, manager Katsuya Nomura asked farm club manager Akinobu Okada who could throw the hardest and Okada named Igawa. Kei was overmatched with Hanshin, allowing 23 hits, 13 walks and 11 runs in 15 1/3 innings in 1999. He was 1-3 with a 4.35 ERA the next year with the Tigers, still working primarily at ni-gun.

Igawa entered the rotation in 2001. Toiling for the last-place Tigers, Igawa went 9-13 but his 2.67 ERA ranked second in the Central League. Only Chunichi's Shigeki Noguchi had a lower ERA. He made his first All-Star team.

In 2002, Hanshin improved to fourth and Igawa's record was 14-9. He finished third in ERA (2.49), trailing Masumi Kuwata and Kenshin Kawakami. He also led the Central League with 206 strikeouts. He got Hanshin's first Opening Day victory in 12 years, was the first Tigers hurler with 10 wins in 10 years and the first Hanshin pitcher with 200 strikeouts in 23 years. He was again an All-Star.

With the Tigers winning the Central League pennant in 2003, Igawa's run support continued to improve. He went 20-5 (including 12 wins in a row at one point), leading the Central in wins; he also led in ERA (2.80, the only pitcher under 3) and was third with 179 strikeouts. He was named to the Best Nine, was an All-Star, won the MVP in the CL and also won the Sawamura Award. After three straight seasons in the top 3 in ERA, Igawa was clearly one of the top hurlers in Nippon Pro Baseball. In the 2003 Japan Series, he struck out 15 in 11 1/3 IP, allowing 16 hits and one walk and had a 5.40 ERA. He got two no-decisions.

His career began to hit the tracks in 2004. He went 14-11 with a 3.73 ERA, though he was still second in wins (behind Kawakami) and led with 228 Ks, 54 more than Kawakami. 2005 was even worse for the former Tigers ace - he was 13-9 with a 3.86 ERA, fifth among his team's starters in ERA, and was briefly exiled to the minors. He was only tied for fifth in strikeouts (down significantly to 145) and 10th in ERA, but was still third in the circuit in victories. Still a productive hurler, Igawa became a target of fan criticism due to his inability to perform at his prior level. In the 2005 Japan Series, Kei struck out 9 in 6 innings but allowed 10 hits and five runs in his loss in game one.

Through 2005, Igawa's career record stood at 72-51. After the 2005 season, the fading hurler requested to be posted to Major League Baseball but Hanshin refused his request. In 2006, he became the fifth-fastest pitcher in NPB history to reach 1,000 career strikeouts. Overall that season, he was 14-9 with a 2.97 ERA but continued to be criticized by the fan base. He was still second in the CL in wins (behind Kenshin Kawakami, 7th in strikeouts, third in innings (209), second in complete games (8), tied Kawakami and Daisuke Miura for the shutout lead (3) and tied Kawakami for the strikeout lead (194). Hanshin did agree to post Igawa following the 2006 campaign. He was 86-60 with a 3.15 ERA and 1,174 K in 1,244 innings in NPB.

On November 28, 2006, the New York Yankees won the bidding for Igawa when the Hanshin Tigers accepted their offer of about $26 million. The New York Mets bid about $15 million for Igawa. [1]. Kei signed for a five-year, $20 million deal. Igawa got married early in 2007, a fact that was revealed to the media by Yankees' minor league coach Bill Connors before Kei could notify anyone. He made his debut as the starting pitcher against the Baltimore Orioles on April 7, 2007, giving up seven runs in five innings.

Igawa was involved in two unusual records early in 2007. When he joined Sean Henn and Chase Wright in picking up wins in one sweep, it became the first time in MLB history that three pitchers got their first major league win as part of a three-game sweep. Later, when Philip Hughes joined Igawa and Wright in making his MLB debut, they became the first trio of starting pitchers in 52 years to all make their debuts in the season's first 20 games. The prior trio had been Larry Jackson, Luis Arroyo and Floyd Wooldridge.

In 2012 Igawa returned to Japan by signing with the Orix Buffaloes.

He is considered somewhat cheap. His hobbies include soccer (he supposedly has hundreds of soccer-related videos), computer games and radio-controlled toys.

With an overhand delivery Igawa's fastball is clocked as high as 94 mph and he also has a slider and a changeup.

Sources include Japanbaseballdaily.com by Gary Garland