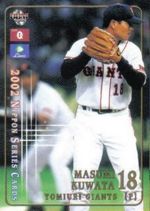 Masumi Kuwata was a top pitcher in Japan in the late 1980s and early 1990s before an injury reduced his effectiveness. He debuted in the major leagues at age 39 with the Pittsburgh Pirates in 2007.

He rose to prominence as the ace pitcher for one of the top high school teams ever; with Kuwata and Kazuhiro Kiyohara PL Gakuen High School twice won the Koshien Tournament and finished runner-up twice. Kuwata was 20-3 in the Koshien Tournaments, setting a post-World War II record for victories; he also homered six times at Koshien. Both Kiyohara and Kuwata wanted to go to the Yomiuri Giants; the Giants chose Kuwata in the first round. He had considered going to Waseda University but signed with Yomiuri instead.

After a rocky debut (2-1, 5.14 in 1986, Kuwata emerged as a star in 1987. In his sophomore season, he sizzled, going 15-6 with a 2.17 ERA. He led the Central League in ERA, made his only Best Nine as the league's top pitcher, won the first of many Gold Gloves and won the Sawamura Award. On March 31, during an exhibition game, he was blown off the mound by a strong wind and a balk was called against him. That year, he also made the first of eight All-Star teams. He was far less successful trying to stop the dynastic Seibu Lions (with Kiyohara) in the 1987 Japan Series. He started game one and got a no-decision, then lost game five. Overall, in 3 2/3 innings, he had allowed 10 hits and 6 runs.

In 1988, he became the youngest pitcher since World War II to start on Opening Day. He won his second Gold Glove and had a 10-11, 3.40 record while making his second All-Star appearance. An All-Star again in 1989, Masumi had a 17-9, 2.60 record for the year. His 249 innings pitched led the Central League. He finished sixth in the league in ERA. He lost game two of the 1989 Japan Series to the Kintetsu Buffaloes but won game six to keep Yomiuri alive as they took the title. Kuwata was 1-1 with a 4.73 ERA in that Japan Series.

The next year, Kuwata set a Nippon Pro Baseball record on June 2, 1990 by getting 20 ground balls in a contest. He was 14-7 with a 2.71 ERA, second in the league to Masaaki Saito. He missed the All-Star nod that year. In addition, a book claimed that Kuwata had taken money from friends in organized crime. Kuwata was fined 10 million yen and suspended for a month and Yomiuri got a fine of 20 million yen. Some argued that Masumi should be suspended for a year but manager Motoshi Fujita fought that penalty and got it watered down. When Yomiuri was swept by Seibu in the 1990 Japan Series, Masumi was on the losing end of a 7-0 outing in game three, going the distance.

In 1994, he was MVP of the Central after a 14-11, 2.52 season. He was tied for third in the league in wins, second to Taigen Kaku in ERA and led in strikeouts (185). He made his seventh and penultimate All-Star team and won his fifth Gold Glove. In one game, he struck out a career-high 16 batters. The pitching-rich Giants (with Saito and Hiromi Makihara joining Kuwata on the front line) won the Central and beat the Seibu Lions in the 1994 Japan Series, the first time Kuwata had topped Kiyohara in the post-season. Masumi had lost game one in that Series, saved game three and won game five. He had a 4.02 ERA. It was rumored that he may pursue a trip to the majors.

Kuwata was limited to 9 games (3-3, 2.48) in 1995, losing most of the year to an elbow injury sustained when he went after an infield pop-up. He also missed the entire 1996 season. When he returned, he was no longer MVP material, regularly posting ERAs over 4.

Kuwata was 10-7 with a 3.77 ERA at age 29 in 1997 and won his sixth Gold Glove as well as making his 8th and last All-Star team. He finished second in the CL in wins in 1998 with a 16-5 year but that was due more to offensive support than pitching greatness as his ERA was 4.08. He allowed 82 earned runs, the most in the league. He did win his seventh Gold Glove.

Kuwata had a 8-9, 4.07 record in 1999 and notched five saves as well, making 10 relief appearances in addition to his 22 starts. In 2000, Masumi was 5-8 with five saves and a 4.50 ERA, making only 10 starts and 20 relief appearances. As Yomiuri did a shuffle of closers, he was only four saves behind team leader Makihara and two behind Hideki Okajima. He pitched two hitless, walkless innings in the 2000 Japan Series as Yomiuri won in the matchup of clubs managed by Japan's two most famous players, Sadaharu Oh and Shigeo Nagashima.

After a 4.83 ERA in 2001 (4-5, 2 Sv), Kuwata had an amazing one-year resurgence form in '02, going 12-6 and leading the league in ERA (2.22) for the second time, after a 15-year hiatus. Kenshin Kawakami and Kei Igawa were his closest competitors. It was the longest stretch between ERA titles in NPB history. Kuwata won his 8th and last Gold Glove that year. In the 2002 Japan Series, Masumi allowed only one run in 7 innings in a game two victory, as Yomiuri pulled off the sweep thanks to the arms of Koji Uehara, Kuwata and Kimiyasu Kudoh and the hitting of Hideki Matsui and Tomohiro Nioka.

Near the end of the year, Yomiuri told him he was free to pursue other options after two decades with the club.

He considered coming to the USA in 2006 but there were not enough visas for non-American players in the minors at the time and few MLB teams offered him a deal, no surprise given his recent track record. Still, he was pursued by the Boston Red Sox and Pittsburgh Pirates in the offseason prior to the 2007 MLB campaign, the Pittsburgh Post-Gazette reported that Kuwata signed a minor league deal with the Pirates on December 18, 2006. He said manager Tatsunori Hara told him he would be a good fit for Pittsburgh. Kuwata was a sensation in Bradenton, FL as over 50 Japanese media members came to see him perform, when the early days of training camp were usually covered by a handful of journalists. He pitched fairly well in spring training but battled injuries, including a right ankle sprain sidelining him for 4-6 weeks to start the year. Prior to the injuries, he had been projected to pitch for the Indianapolis Indians of the AAA International League.

Kuwata recovered in time to pitch for Indianapolis on June 2 against the Charlotte Knights. He relieved another pitcher fresh off of the Disabled List, John Wasdin, in the fourth inning. Ryan Sweeney greeted him with a single. He then fanned Ernie Young, picked off Sweeney and got a fly out from Casey Rogowski to complete his first minor league game. Kuwata allowed no runs, 3 hits and no walks in 4 1/3 IP for Indianapolis, striking out 3. 36 of his 48 pitches were strikes. He was called up by Pittsburgh when Salomon Torres went on the DL on June 9.

Kuwata made his Major League debut on June 10 in a loss to the Yankees. In two innings, he walked two and allowed one hit, but the hit was a home run by Alex Rodriguez with a runner aboard. His first batter faced was Melky Cabrera, who flew out to begin a 1-2-3 fifth inning before he ran into trouble in the sixth. He was the oldest rookie to debut in the majors since Diomedes Olivo 47 years earlier; Kuwata was 39, Olivo 41.

Kuwata allowed only 3 hits and one run in the next 8 2/3 IP and drew notice for his sharp curveball. On July 2, though, Kuwata relieved John VanBenschoten in the 7th inning of a 3-3 tie. He proceeded to give up two walks, five hits and 7 runs in 2/3 of an inning to the Brewers, capped by a Damian Miller grand slam. Kuwata struggled throughout the rest of the next month, allowing runs in 8 of 10 appearances and having a 9.43 ERA after 19 major league games. Pittsburgh designated him for assignment on August 14. Kuwata decided to return to Japan instead of going to the minor leagues. As a souvenir, he left a signed baseball in the locker of each of the Pirates.

He had right ankle surgery after his season ended. Returning to Pittsburgh for spring training in 2008, Kuwata posted a 1.80 ERA but failed to make the team and retired. He was offered a coaching job, a scouting job and a minor league job with Pittsburgh, but refused all three offers. He instead opted to become a sportswriter for the Hochi Shimbun paper.

Kuwata is a movie and wine fan who is not fond of animals. A fairly fluent English speaker, he became a close friend of former Giants Bill Gullickson and Warren Cromartie. Gullickson gave one of his sons the middle name Kuwata in honor of his former teammate. He has two sons, Masaki and Masashi; his wife Maki makes it four M.K.s in the family. He is a member of a Buddhist sect called the Perfect Liberty Kyodan and his motto "Life is Art" is directly lifted from that group's teachings. His younger brother Izumi is a pro golfer. For two years, he was Yomiuri's representative in the Japan Professional Baseball Players Association.

He has spoken out against the corporal abuse that has been prevalent in Japanese sports in childhood, contrasting it to what he witnessed in the USA.

Include Japanbaseballdaily.com by Gary Garland, Baseball Beyond Our Borders ed. by George Gmelch and Daniel Nathan