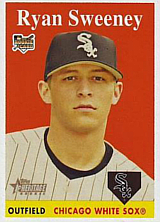 Sweeney slumped in 2007, hitting .270/.348/.398 for Charlotte and .200/.265/.333 in a brief stay with Chicago. That winter, he was traded with Fautino De Los Santos and Gio Gonzalez to the Oakland Athletics for Nick Swisher. He became a quasi-regular in right and center field for the A's in 2008, playing 115 games with a batting line of .286/.350/.383. He filled the same role in 2009, and saw his playing time increase to 134 games, which allowed him to set career highs in most counting stats, including 148 hits, 31 doubles, 6 homers, 53 RBI, 68 runs scored and 40 walks. He hit .293/.348/.407. Sweeney's 2010 season was cut short by a leg injury which required surgery after the All-Star break. He had been off to a good start, hitting .294 in 82 games and starting practically every game in right field before being shut down for the remainder of the season. In 2011, he was back in full health, but did not have a regular starting spot anymore, as the A's outfield included Josh Willingham in left, Coco Crisp in center and David DeJesus in right. The versatile Sweeney backed up all three of them and ended up playing 108 games, but hit only .265 with a single homer and 25 RBI. On December 28th, he was traded to the Boston Red Sox alongside Andrew Bailey in return for OF Josh Reddick, P Raul Alcantara and IF Miles Head.

Sweeney got to play regularly in right field for the Red Sox at the start of 2012, but also made a couple of short stays on the disabled list; at the end of July, he was hitting .260 with 19 doubles but no homers in 63 games. On July 30th, in an act of frustration, he punched a door in the dugout after being robbed of a hit in the bottom of the 8th inning of a game against the Detroit Tigers, injuring his left throwing hand. He fractured his left knuckle, a season-ending injury. The Red Sox were not overly interested in bringing him back in 2013 after acquiring a couple of experienced outfielders over the offseason, but plans changed when they learned that Ryan Kalish, on whom they were counting as their main back-up in the outfield, had to undergo surgery on his shoulder and would miss spring training. As a result, they re-signed Sweeney to a minor league deal to provide needed depth. He failed to make the team out of spring training, though, and was released. Signing with the Chicago Cubs, he played a couple of seasons at Wrigley Field. hitting .266 in 70 games in 2013 and .251 in 77 games in 2014. The first of these two years, he matched his career high with 6 homers and had a .448 slugging percentage, the best of his career. He became a free agent after the second season and signed with the Minnesota Twins, but he was released at the end of spring training in 2015, bringing his career to an end.