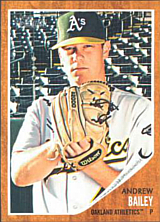 Growing up in the New Jersey suburbs of New York, NY, Bailey was selected by the Oakland Athletics in the 6th round of the 2006 amateur draft out of Wagner College in Staten Island, where he set a school record for career strikeouts. He was signed by scout Jeff Bittiger and was a starter his first couple of seasons in the minor leagues, going 2-5 but with an excellent 2.02 ERA for the Vancouver Canadians in 2006, and then 5-8, 3.46 in 23 games between the Kane County Cougars, Stockton Ports and, for one game, the Triple A Sacramento RiverCats, in 2007. In 2008, he was moved to the bullpen at midseason while pitching for the Double A Midland RockHounds. He made 15 starts in 37 appearances, with a record of 4-9, 4.32. Up to that point, he had done little to stand out, but the A's liked what they had seen and added him to the major league roster after the season.

Bailey made Oakland's bullpen out of spring training in 2009 and pitched so well that he quickly became the team's closer. He pitched 68 games and 83 1/3 innings with a sparkling 1.84 ERA, 91 strikeouts, 24 walks and 26 saves. He was the A's sole representative at the 2009 All-Star Game, then beat the Texas Rangers' Elvis Andrus and the Detroit Tigers' Rick Porcello in the vote for Rookie of the Year. He returned as closer in 2010 and was, if anything, even better. His ERA was a minute 1.47 in 47 games, he was again named to the All-Star team, and he was leading the American League in saves at that point of the season. However, he went on the disabled list from July 21-August 21 because of an elbow problem, and did not pitch after September 17th. As a result, he finished with only 25 saves. He had surgery on his elbow, performed by Dr. James Andrews, after the season, a procedure which delayed the start of his 2011 season. He was as sharp as ever when he returned on May 29th, keeping his ERA under 1.00 until early July. Only a couple of poor September outings, during which he gave up 5 runs in an inning and a third, kept him from a tremendous ERA for a third straight year. Instead, he finished 0-4, 3.24, with 24 saves and 41 strikeouts in 41 2/3 innings.

On December 29, 2011, the Boston Red Sox acquired Bailey from the A's, along with outfielder Ryan Sweeney, in return for outfielder Josh Reddick and minor leaguers Miles Head and Raul Alcantara. Andrew was expected to step in for Jonathan Papelbon, who had left earlier in the offseason via free agency, as the Sox's closer. Things started off on the wrong foot in 2012, as he injured his right thumb during spring training and underwent surgery, putting him on the disabled list for the first half of the season. He made his debut with the Sox on August 14th, throwing one-third of an inning against the Baltimore Orioles; by that time, the team had fallen well out of contention, with an underperforming bullpen a significant contributor. He pitched 19 times for the Red Sox with a 1-1 record and 6 saves but a 7.04 ERA. As a result of his lack of results, the Red Sox went out and acquired Joel Hanrahan to serve as closer in 2013, but he in turn was injured at the start of the year, giving Bailey a chance to reclaim his job. He did just that by going 1-0, 1.46, with 6 saves in April, but he suffered an injury to his right biceps and was placed on the disabled list in early May, retroactive to April 29th. In the meantime, Hanrahan was back healthy and ready to reclaim the closer's job, but only managed to hold it for a week before going down with another injury on May 6th. Bailey was relegated to a supporting role when he came back later in May. He went down with yet another injury in July, this time to his shoulder, and opted to undergo surgery on his labrum and capsule, putting him out for a year. He was 3-1, 3.77 in 30 games with 8 saves. In 28 2/3 innings, he had given up 23 hits and struck out 39.

In February 2014, he signed a minor league contract with the New York Yankees worth $2.5 million if he managed to make the team's roster. He did not pitch in the majors that year, but in 2015 made 10 appearances with New York, going 0-1, 5.19. He split 2016 between the Philadelphia Phillies and Los Angeles Angels of Anaheim, going a combined 3-1, 5.36 in 45 appearances. He did record 6 saves for the Angels, where his ERA was 2.38 in 12 games, giving indications that he was perhaps finally finding his old form back. After the season, he re-signed with the Angels for one year. He made just 4 appearances in 2017, going 2-0 with no runs allowed in 4 innings, before arm problems resurfaced; he had made a few appearances in the minors before that, but his final outing came on August 15th. He saw the writing on the wall and chose to retire as a player.

Bailey began his post-playing career in 2018 as a Major League Coaching Assistant/Video-Replay Coordinator for the Angels. In 2019, Bailey jumped into coaching as the Angels' bullpen coach under newly-appointed manager Brad Ausmus, but left when Ausmus did at the end of the season. He then joined the staff of the San Francisco Giants as co-pitching coach (with Brian Bannister) for manager Gabe Kapler in 2020. As of 2022 he remains a pitching coach for the Giants.