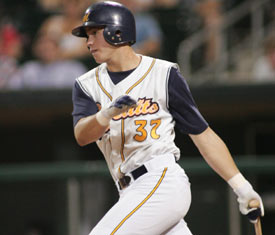 Evan Longoria is an infielder who played for the Tampa Bay Rays in 2008 to 2017, before being traded, and was arguably the greatest player in franchise history.

Longoria lettered four years at St. John Bosco High School. He batted .400 with six home runs as a senior, and was named to the All-Serra League team.

Longoria transferred to Long Beach State from Rio Hondo Community College after his freshman year. He was not drafted after high school and Long Beach State was the only four-year school to offer him a scholarship. In 2005, Longoria hit .320 and led the Dirtbags in hits, RBI and stolen bases. That summer, Longoria played second base for the Chatham A's in the Cape Cod League. After leading the league in home runs (9), RBI (35), slugging percentage (.500) and extra-base hits (16), Longoria was named the league's Most Valuable Player. Baseball America named him to the 2005 College Summer All-America Team, and he emerged as a premium draft prospect.

Longoria was selected by the Tampa Bay Devil Rays in the first round of the 2006 amateur draft with the third pick. Scouted by Fred Repke, he was signed for $3 million and made his pro debut that summer. He progressed through the minor leagues quickly, reaching AA after 36 games as a pro. In his first full week at AA (ending on August 13, 2006), Longoria was awarded the Southern League's Offensive Player of the Week distinction.

In 2007, Longoria entered the season as the best prospect in the organization, and seventh in baseball according to Baseball America. He led the Southern League in slugging percentage (.528) and OPS (.930), and was named the league's Most Valuable Player. He was also a mid-season and post-season All Star, Offensive Player of the Week for the week ending on June 25, 2007 and Player of the Month in May.

In the 2007 Futures Game, Longoria started at third base and batted third for the U.S. He doubled off Rick Vanden Hurk in his only at-bat and was hit by a pitch by Fautino De Los Santos.

Longoria was an invitee to the renamed Tampa Bay Rays' spring training in 2008 and impressed everyone with his skills, both at the plate and in the field. He seemed to have won the job as the team's regular third baseman, but was sent down to AAA on the camp's last week as Willy Aybar was proclaimed the team's regular. Most observers saw this as a ploy to delay Longoria's major league debut by a few months, in order to set back his arbitration clock. The controversy faded quickly, however, as Aybar was placed on the disabled list with a hamstring injury 10 days into the season and Longoria was called up to replace him; ironically, he was only hitting .136 for the Durham Bulls at that point, while Aybar had started off well, hitting .292 with some power. Longoria made his debut on April 12 against the Baltimore Orioles, going 1 for 3 with a walk and an RBI. He quickly established himself as one of the best rookies in Major League Baseball, leading the Rays to the best record in the majors by the All-Star break. He was voted to the 2008 All-Star Game as the American League's "Final Man" in a run-off vote against four other players, a sign of the Rays' new-found national profile. He was hitting .275/.348/.513 with 23 doubles and 16 home runs at the time. He missed some time in the second half with an injury, but still finished with 27 home runs and 85 RBI and a .272 batting average and was voted the American League Rookie of the Year after the season.

On April 3, 2014, Longoria tied Carlos Pena for the most home runs in Tampa Bay history when he hit #163 off Esmil Rogers of the Toronto Blue Jays. He passed Pena on April 19th with a shot off Ivan Nova of the New York Yankees in a 16-1 romp in which he collected 4 RBI. he played all 162 games for the Rays that year, hitting .253 with 22 homers and 91 RBIs. His OPS+ of 106 was the lowest of his major league career.

Longoria played in 270 consecutive games between 2013 and 2015 before having to sit out the game of May 7th with flu-like symptoms.

Longoria drove in the first run and hit the first homer of the 2017 major league season. In the 1st inning of the Rays' opening day game against the New York Yankees, he hit a sacrifice fly to drive in Corey Dickerson with the first run of the year, then in the 2nd he went deep off Masahiro Tanaka for a two-run blast. On August 1st, he became the second player in Rays history to hit for the cycle, following B.J. Upton. He pulled off the feat against the Houston Astros by hitting a two-run homer off Mike Fiers in the 1st, then added a triple in the 3rd. He added a single later in the game, then in the 9th came up needing a double and ran with all his speed to slide into the bag just as José Altuve was applying the tag on him. He was initially called out, but a video review reversed the call, confirming his feat, as the Rays won the game, 6-4. He hit .261 in 156 games with 20 homers and 86 RBIs and also won his third Gold Glove.

At the end of the season, he was the Rays' all-time leader in almost all hitting categories, including games played (1435), at-bats (5450), runs scored (780), total bases (2630), doubles (338), homers (261), RBI (892) and walks (569); he was also second in hits behind Carl Crawford. he was still under contract for five years at $86 million, but his 2017 season had been his least productive, with his OPS+ just hitting the 100 level (he had been above that in each of his 9 previous seasons, so the Rays decided to sell him while he still retained some value. On December 20th, he was sent in a trade to the San Francisco Giants in return for four players: IF Christian Arroyo, the Giants' top prospect, veteran OF Denard Span, and prospects Matt Krook and Stephen Woods. The Giants had received the worst production in the majors from their third basemen in 2017 and were convinced that improving that area of the team would go a long way towards restoring it to competitiveness.

Longoria played regularly over the first two and half months of the season, and while after 67 games his batting average was just .246, he had contributed 16 doubles and 10 homers. The Giants were hanging around .500 on the fringes of the division race, but on June 14th, he suffered a broken bone in his left hand when struck by a pitch from Dan Straily of the Miami Marlins. That put him out of action for an extended period.