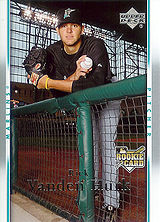 Rick Vanden Hurk has played in the majors, Japan (setting a record there), South Korea (winning an ERA and strikeout title), the Netherlands and Puerto Rico. He has been on two Korean Series champions and one Japan Series champ. He had played for the Dutch national team and was the third or fourth native of the Netherlands to make it to the majors as a pitcher. The 7th or 8th Dutch player to make it to the majors (depending on whether you count the National Association as a major league), he was the first Dutch big leaguer since Robert Eenhoorn in 1994.

Rick's father ran a baseball camp in the Netherlands and van den Hurk came to the US as a 16-year-old to practice as a catcher in the Playball Baseball Academy in Fort Lauderdale, FL but was converted to pitching. Vanden Hurk had played briefly in Hoofdklasse as a catcher. He impressed the Florida Marlins enough to get a contract with scout Fred Ferreira in November 2002. In 2003, van den Hurk debuted with the GCL Marlins and went 2-6 with a 5.35 ERA. He allowed a .308 average and walked 20 in 38 2/3 innings. His season was cut short by a hip operation.

Vanden Hurk moved up to the Jupiter Hammerheads in 2004. The teenager went 2-3 with a 3.26 ERA, though control remained iffy (31 BB in 58 IP). He averaged barely over four innings per start. He missed some time to play with the Dutch national team as they prepared for the 2004 Olympics, but he did not make the final cut.

Vanden Hurk saw limited action in 2005. He was 1-2 with a 2.45 ERA for the Greensboro Bats and 0-1, 4.05 for the Jupiter Hammerheads, averaging over a strikeout per inning but plagued by injury. Rick had to undergo Tommy John surgery, which prevented him from getting a shot at the Dutch team for the 2006 World Baseball Classic. Rick only pitched three rehab games in 2006, getting no decisions and a 2.70 ERA for Jupiter. He whiffed 15 in 10 innings, allowing only five hits, but walked six. Having barely pitched for a couple years, Florida was anxious to give van den Hurk an opportunity, so the return of Hawaii Winter Baseball was fortuitous for the young right-hander. Vanden Hurk lit up the league for the Waikiki BeachBoys. He was 2-2 with a 3.60 ERA but allowed only 23 hits in 40 innings, walking 17 and whiffing 63. He was 17 strikeouts ahead of the HWB runner-up, Yankees prospect Joba Chamberlain. He made the league All-Star team. Baseball America ranked Vanden Hurk the #6 prospect in the league, right behind Eric Young Jr. and ahead of hot commodities like Ian Kennedy.

Vanden Hurk was slated to start 2007 with the Carolina Mudcats but an injury to Ricky Nolasco led to a call-up to the Marlins before he had ever pitched above class A.

He made his Major League debut at the Florida Marlins' starting pitcher on April 10, 2007; the first batter he faced was Craig Counsell, who walked. He allowed 1 run in 4 2/3 innings before being removed after a rain delay in what would be the first MLB game to be suspended after a change of rules in the 2006-07 off-season.

Vanden Hurk is only the third pitcher born in the Netherlands, after Bert Blyleven and Win Remmerswaal. If one counts the National Association as a major league, Vanden Hurk was 4th, as Rynie Wolters also would have preceded him. He was the 14th player with a Dutch passport to make it to the majors and the 5th player to be raised in the Netherlands and make it to The Show. The prior four had been Remmerswaal, Rikkert Faneyte, Eenhoorn and Ralph Milliard. Vanden Hurk was the youngest of those five at the time of his MLB debut.

Vanden Hurk struck out 15 batters in 12 innings in the call-up but also walked 10 and allowed 19 hits and 17 earned runs. He was then optioned back to Carolina with Nate Field taking his place on the Marlins roster. He went 2-1 with a 3.46 ERA for Carolina, striking out 52 while walking 13 and allowing 33 hits in 41 2/3 IP in 7 starts. That earned a re-call to Florida as an emergency starter in a doubleheader. In his first game back, he held the Atlanta Braves hitless in six innings before finally allowing one in the 7th. He got his first big-league win. He allowed 10 earned runs in 17 IP in this time up in the majors, striking out 17, walking 7 and allowing 14 hits. He was 2-2 with a 8.38 ERA between his two stints when he was sent back down to Carolina. After nine total games in Carolina, he was 2-2 with a 3.52 ERA and 61 strikeouts in 53 2/3 IP. He was promoted to the Albuquerque Isotopes, the 4th Dutch citizen to play in AAA that year - Randall Simon and Yurendell de Caster were minor league (and MLB) veterans but Roger Bernadina had beaten Vanden Hurk to AAA by just over a week.

Vanden Hurk pitched a scoreless first inning for the World in the 2007 Futures Game, allowing one hit (a double by Evan Longoria) and fanning one. He got credit for the victory for the World, which won 7-2. Vanden Hurk was 2-0 with a 2.25 ERA for the Isotopes before yet another change in scenery, returning to Florida. In his first game back, he threw five scoreless frames in a combined six-man shutout of the defending World Series champion Cardinals. On July 27, he allowed the 754th career MLB home run hit by Barry Bonds, putting Bonds within one of Hank Aaron's record. Due to his high inning total between the minors, majors and Hawaii in 2007 and his recent surgery, Vanden Hurk was removed from the Marlins rotation in September to rest his arm.

Vanden Hurk made his debut for the Dutch national team in a major event in the 2009 World Baseball Classic. He tossed 3 1/3 scoreless innings against the Puerto Rican national team, but left after a walk to Carlos Delgado and hit by Iván Rodríguez. David Bergman relieved and escaped the jam, but the Dutch went on to lose 3-1 when the bullpen had a 8th-inning meltdown. Rick's second start came against Team USA, when he lost to Roy Oswalt; a big blow was a two-run homer by Jimmy Rollins as the right-hander only lasted two innings. He finished the Classic 0-1 with a 5.68 ERA.

In 2012, he was signed by the Toronto Blue Jays in February, claimed off waivers by the Cleveland Indians in March, released in April, then signed 3 days later by the Pittsburgh Pirates. He struggled in four outings for the 2012 Pirates (0-1, 4 R in 2 2/3 IP), spending most of the year with the Indianapolis Indians and doing well (13-5, 2.92). He was 5th in the 2012 International League in ERA (between Adam Wilk and teammate Rudy Owens), tied Ramon Ortiz for second in wins (two shy of Zach Duke) and 10th in strikeouts (113, between Charlie Shirek and Casey Crosby). Among Pirate farmhands, he was first in wins (Brandon Cumpton was two bac) and 5th in Ks (between Jeff Locke and Phil Irwin.

The Samsung Lions signed Vanden Hurk for 2013; he missed the 2013 World Baseball Classic while preparing for the season. Despite missing key hurlers like Vanden Hurk and Jair Jurrjens, the Netherlands still made the final four. Rick was 7-9 with a 3.95 ERA as Samsung won the title. He had mixed results in the 2013 Korean Series. In game two, he was excellent (5 2/3 IP, 4 H, 3 BB, 7 K) in a scoreless duel with Dustin Nippert but Samsung fell in extra innings to the Doosan Bears. In game 5, he surprisingly came in relief, tossing two shutout innings for the win as Samsung avoided elimination. Starting game 6, he served up a leadoff homer to Soo-bin Jung (the first leadoff homer in Korean Series history) and walked two more in the first before leaving with a right biceps injury. Eight relievers were needed to finish off the win. Samsung became the first team to win a Korean Series after being down 3 games to 1. Vanden Hurk missed the 2013 Asia Series due to the injury.

Moving from one Asian powerhouse to another, he signed with the Softbank Hawks for 2015. He went 9-0 with a 2.52 ERA, .98 WHIP and 120 K to 22 BB in 93 IP. He broke Kazuhisa Inao's best start to a Pacific League career (8-0). Despite only 15 starts, he was 8th in the PL in strikeouts (between Yusei Kikuchi and Daiki Tomei) and missed the top 10 in wins by one. He started game 2 of the 2015 Japan Series against the Yakult Swallows and shut them out for 8 innings on 3 hits and no walks, fanning seven, before Dennis Sarfate closed it out. Dae-ho Lee was the Japan Series MVP but van den Hurk joined Shota Takeda and Kenji Akashi as being honored as Outstanding Players for the Series.

He then began 2016 5-0 with a 1.98 ERA to break Tsuneo Horiuchi's 50-year-old record for most consecutive wins to open a NPB career as he was now 14-0 in Japanese regular season competition. He also set a record for winning streak by a foreign pitcher, breaking Tai-Yuan Kuo's 28-year-old mark.