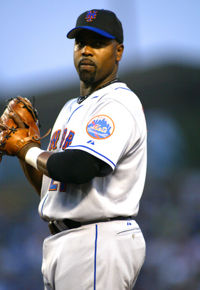 Carlos Delgado was a star slugger who hit over 450 major league home runs. He was marked as a star at an early age, frequently being named an All-Star in the minors as a catcher. He began in the minors at age 17, and was in the minors for most of 1989 to 1995, finally becoming a major league regular with the Toronto Blue Jays in 1996 at age 24.

He was MVP of the Southern League with the Knoxville Smokies in 1993, when he led the league with 25 home runs, 102 RBI, 102 walks, a .430 on-base percentage, and a .524 slugging percentage. He was converted away from catcher in 1994, when the Blue Jays made him their regular left fielder to start the season. After a great month of April, when he hit 8 home runs and drove in 21 runs, he sputtered in May, hitting .178 with no power, and was sent to the AAA Syracuse Chiefs for more seasoning. He returned to the Blue Jays at the start of the 1995 season, but again failed to hit, going 4 for 26 with one home run in 13 games. He finally managed to establish himself as Toronto's starting designated hitter in 1996, and replaced John Olerud as the team's first baseman in 1997. In the majors, he only appeared in two games as a catcher.

On September 25, 2003, he hit four home runs in one game (against the Tampa Bay Devil Rays). In April, 2001, he notched two three-homer games. After 12 seasons as a Blue Jay, he left via free agency after the 2004 season and signed a long-term contract with the Florida Marlins. Flush from their 2003 World Series win, the Marlins were at the time willing to spend to compete for the NL East title, but changed course after the season, deciding to build with youth. Delgado hit well in his one year in Florida in 2005, slugging 41 doubles and 33 homers and driving in 115 runs with a .301 batting average. He was dealt to the New York Mets in return for three young players.

Off the field, Delgado was a proud man who stood up for what he believes in. He was a vocal opponent of the use of the Puerto Rican island Vieques as a bombing target practice facility of the United States military, and was an active opponent of the occupation of Iraq. Controversially, he refused to stand during the playing of the national anthem and God Bless America during the seventh inning stretch. Delgado was an active humanitarian in Puerto Rico. When he was traded to the Mets, he was told by the organization to drop his public protest to the Iraqi war and stand for God Bless America. He won the Roberto Clemente Award in 2006.

Delgado hit 38 homers with 118 RBI for the Mets in 2006 and played in the postseason for the first time. He hit very well, batting .429 with a homer in a three-game sweep of the Los Angeles Dodgers in the NLDS, then did even better in the NLCS, batting .304 but with 3 doubles, 3 homers and 9 RBI as the Mets lost in seven games to the eventual World Champion St. Louis Cardinals. He did not have a very impressive 2007 season, with an Adjusted OPS+ that was barely above average for all players and well below average for a first baseman; on top of that he was injured on the last day of the season when a pitch from Dontrelle Willis fractured his hand. He came back with a solid season in 2008, again hitting 38 homers with 115 RBI and having a particularly good second half, but he played only 28 games in 2009; he was hitting a solid .298 with 23 RBI when his season ended as a result of a hip injury in early May, one of a slew suffered by the team in its first season at Citi Field. It turned out to be the end of his career, as he could find no team interested in his services for 2010 because of questions about his recovery. However, he only confirmed that he was retiring on April 13, 2011, at a press conference in Puerto Rico. He had undergone three hip surgeries since his last game.

In 2015, he was voted into the Canadian Baseball Hall of Fame for his play for the Blue Jays.