Citi Field is the home field for the New York Mets, being first used in the 2009 season. Built as a replacement for the aging Shea Stadium, Citi Field is named for the ailing financial services company Citigroup and is located in the Flushing neighborhood of Queens, NY.

The contrast between Citi Field and Shea Stadium couldn't be more startling, even though the two ballparks are built on adjacent pieces of land. Shea was nondescript from the outside, surrounded by a sea of parking lots and lacked any character inside; Citi Field has a street front and integrates architectural elements from two older New York ballparks, the rotunda from Ebbets Field, named the Jackie Robinson Rotunda here, and bleachers that overhang the playing field taken from the old Polo Grounds. The shape of the field is irregular, with a large outfield area that makes the park pitcher-friendly. Just beyond the center field fence is a huge red apple which is hidden from view most times but rises above the playing field when a Mets player hits a home run. The two bullpens are located beyond the outfield fence and are covered by a canvas roof to prevent fans from interfering with relief pitchers when they warm up. The right field corner is especially tricky, as it juts out under the overhanging bleachers and features a mesh wall through which some spectators can see the action up close.

The ballpark cost $800 million to build, making it one of the more expensive new ballparks built in the wave of construction begun with the opening of Oriole Park at Camden Yards in the early 1990s. This was a deliberate effort by Mets owner Fred Wilpon to create a stadium of which Mets fans would be proud, after having had to endure the underwhelming Shea Stadium for 46 years. After the 2008 season, the adjacent Shea was demolished and the area where it stood was converted into a parking area for the new park. 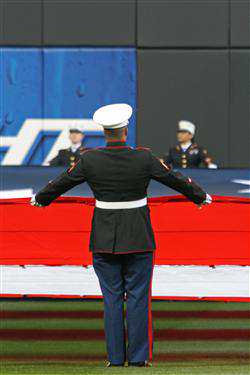 On April 13, 2009, Jody Gerut of the San Diego Padres was the first player to hit a home run in Citi Field. Leading off the game, he homered on a 1-1 count off Mets pitcher Mike Pelfrey. The Padres won the game 6 - 5 as Adrian Gonzalez and David Wright also hit home runs. However, that initial barrage proved deceiving, as the park turned out to be one of the more difficult ones in which to hit home runs. The power numbers of many Mets hitters went down significantly as a result, notably David Wright and Jason Bay. After the 2011 season, the front office made some adjustments to the park's dimensions, in an attempt to make it friendlier to hitters. The right-center field power alley was brought in from 415 feet to 398 feet, and a notch in the wall was eliminated. In left field, the 16-foot wall known derisively as the "Great Wall of Flushing" was lowered to 8 feet, with 100 seats and a picnic area being added in the spaces thus gained. The fences were moved in again after the 2014 season, by about 10 feet in front of the right field bullpens. At 380 feet, right-center field remained very distant, even after the successive moves.

Citi Field hosted the 2013 All-Star Game. One year later, World Series games were played here when the Mets faced the Kansas City Royals. On September 11-13, 2017, the ballpark hosted a three-game series between the Tampa Bay Rays and New York Yankees that was moved from Tropicana Field in St. Petersburg, FL because of Hurricane Irma. On January 1, 2018, it was temporarily transformed into an outdoor hockey rink to host the NHL Winter Classic, a 3-2 overtime win by the New York Rangers over the Buffalo Sabres.

The famous red apple was featured on a baseball card in the 2018 Topps set as part of a special subset entitled "Team Traditions & Celebrations". The card shows a picture of the sculpture emerging from its hiding place.