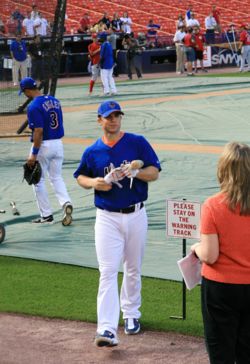 2005 saw David Wright play his first complete season at the major league level after a successful and short minor league career in the New York Mets system. To say the least, it was a huge success. In 575 AB, David compiled 102 RBIs, 99 runs scored, while hitting for a .911 OPS. Add on his 17 stolen bases, and David had himself a monster first full campaign. If his season had one dark spot, it would have to be defensively. At third base, David was spectacular at times, but also inconsistent at others. While he has been an above average fielder his entire career, he seemed to take some steps backwards in 2005 to the tune of 24 errors. However, any shortcomings David may have had defensively that year were more than made up for by his bat, becoming the first Met since Mike Piazza in 2000 to hit for 100+ RBIs.

This was only a first taste of the tremendous success Wright would enjoy. In 2006, he drove in 116 runs with a .311 batting average as the Mets came within one game of reaching the World Series. He belted four hits, included two doubles, and collected 4 RBI in the NLDS against the Los Angeles Dodgers, but only went 4 for 25 with a home run in the NLCS which the Mets lost in seven games to the St. Louis Cardinals. In 2007, he overcame a slow start to bat .325 with 42 doubles and 30 home runs, while scoring and driving in over 100 runs. He finished fourth in the MVP vote and won both a Silver Slugger Award and a Gold Glove. However, the season ended on a sour note as the Mets were edged out of the postseason by the Philadelphia Philies after an epic September collapse.

David Wright had another outstanding season in 2008, batting over .300 for the fourth straight year, with a career-high 33 homers and 124 RBI. He was third in the National League with 115 runs scored, another personal best. Although his fielding was not as sparkling as in 2007, he repeated the Silver Slugger/Gold Glove double, and this time was seventh in the MVP vote, as his teammate Carlos Delgado picked up some of the votes directed to Mets players. Once again, the Mets fell just short of the postseason as the Phillies went all the way to the Championship, but Wright's place among MLB's top performers was well secure.

In 2009, Wright became the first Met to homer in the new Citi Field, driving a Walter Silva pitch beyond the fence in left-center field for a game-tying three-run shot in the 5th inning of the Mets' home opener on April 13. At this stage in his career, David was being projected as possibly the best New York Mets positional player of all time. However, the rest of 2009 was not so bright; he was one of a number of Mets players complaining that the new ballpark's dimensions hurt his offensive production. His home run total fell to 10, and his RBI to 72 in 144 games, although he did maintain his batting average at .307. he was back to more familiar levels of production in 2010, batting .283/.354/.503 with 29 homers and 103 RBI.

Wright was diagnosed with a stress fracture in his lower back, resulting from a diving tag on Carlos Lee of the Houston Astros on April 19, 2011. The injury was not discovered for almost a month, and he continued to play for a time, but struggled at the plate. He was hitting .226 in 39 games when the verdict about the extent of his injury came out on May 16th. He was placed on the disabled list the next day. With 1B Ike Davis also out, the Mets were forced to shuffle their line-up in the absence of their two corner infielders. He returned to the line-up on July 22nd and immediately went on a torrid streak, getting a hit in each of the remaining games in July and batting .455 (20 for 44) with 12 RBIs in 10 games. On August 11th, he hit a double in a game against the San Diego Padres for his 2,048th total base, moving him past Ed Kranepool into first place all-time in Mets history. Overall though, it was his worst season in the majors, as he finished with a .254 batting average, 14 homers and 61 RBI in 102 games.

David started the 2012 season red hot, with 7 hits over his first 12 at-bats, but then injured a finger diving back to first base against the Washington Nationals on April 9th. Luckily, the injury was not serious and on April 18th, he had a 3-RBI day in a 14-6 loss to Atlanta, giving him 733 RBI for his career. That tied him with Darryl Strawberry for the most in Mets history; he passed him on April 25th with a two-run homer off the Miami Marlins' Mark Buehrle. On September 26th, he passed Kranepool again, this time on the Mets' all-time hits list, when he collected his 1419th base hit. He ended the year with a .306 average in 156 games, with 41 doubles, 21 homers and 93 RBI as the Mets' best offensive player. On November 30th, he was rewarded for his effort with an 8-year contract extension worth $138 million - the largest contract in the history of the franchise, beating by $1 million that given a few years earlier to P Johan Santana. A few weeks later, he announced his engagement to be married to model Molly Beers, whom he had dated for several years.

Wright was the starting third baseman and captain (earning him the nickname "Captain America") for Team USA in the 2013 World Baseball Classic and was the team's best player, hitting .488/.526/.753 with 10 RBI and being named to the all-tournament team (the only US player picked. He led the Classic in RBI by one over José Dariel Abreu, even though the US did not make the final round and even thought Wright missed the last US game due to injury. Among his key hits were a grand slam off Matt Torra that broke a 2-2 tie with Italy, and a 3-run double off Xavier Cedeño in a win over Puerto Rico. On March 21, 2013, he was named the fourth captain in Mets history, and the first since John Franco last played for the team in 2004. he played only 112 games that season, however, but posted the highest OPS+ of his career at 156 courtesy of a .307 average, 23 doubles, 18 homers and 58 RBIs. He fell back significantly in 2014, with his average down to .269 and only 8 homers although he did drive in 63 runs in 134 games. he did not play in the All-Star Game for only the second time since 2006. His season ended in early September because of a nagging injury to his left shoulder that had bothered him since June, the Mets deciding to rest him given their season was headed nowhere. His OPS+ was an even 100, a reflection of the fall in offensive numbers all around the National League that year.

Wright suffered another injury early in the 2015 season, this time a pulled hamstring resulting from running the bases on April 14th. He was hitting .333 after 8 games, but the injury turned out to be more problematic then expected, as he also was laid down with a spinal injury, and was placed on the 60-day disabled list on July 24th, in recognition that he was unlikely to play again that season. In fact the Mets acquired Juan Uribe and Kelly Johnson in a trade that day, both players having extensive experience at third base. Defying the prognosis however, he played his first rehabilitation game with the Class A St. Lucie Mets on August 10th and by August 24th, he was back in the Mets' starting line-up. He had a memorable first game back as he homered into the upper deck in left field at Citizens Bank Park off Adam Morgan of the Phillies in his first at-bat, part of a record-setting day for the Mets when they hit 8 homers and 14 extra-base hits in a 15-7 win. He had another hit in 5 at-bats and scored three runs, but also showed some rust in the field by committing a couple of errors. The good news for the Mets was that they had been able to build a sizable lead in the NL East in his absence and could afford to give him regular rest the rest of the way. He was back in time to play in the postseason and did not miss a game as the Mets made it all the way to the World Series. He was at his best in the sweep of the Chicago Cubs in the NLCS, when he hit .286 with a pair of doubles and 5 runs scored.

He was hitting .226 with 7 homers and 14 RBIs in 37 games at the end of May in 2016 when health issues surfaced again. This time it was a herniated disc in his neck which sent him to the disabled list for an extended period. On June 16th, it was announced that he would have to undergo surgery to fix the problem, making his return that season even more problematic. Indeed, he did not return at all that year as the Mets brought back Jose Reyes to get the bulk of the work at third base in his absence. He was hopeful to return to the starting line-up at the start of the 2017 season, but ran into more health issues in the first couple of weeks of spring training. This time, it was an impingement in his right shoulder that forced him miss opening day. The news got worse after that, as on April 20th, he was transferred to the 60-day DL as he needed to work on regaining his arm strength. He began a rehabilitation assignment with the St. Lucie Mets on August 22nd but was shut down after three games because of shoulder pain. In early September, the Mets announced that he would undergo rotator cuff surgery. Then in early March, 2018, the Mets made it known that Wright was still two months away from resuming baseball activities because of lingering back and shoulder issues. He began a rehabilitation assignment with St. Lucie on August 12th, which was widely seen as his final chance to return to the big leagues, after being away for 15 months. On August 28th, he was moved up to the AAA Las Vegas 51s. On September 13th, the Mets announced he would be activated for the team's final homestand of the season, although this was only an opportunity for him to appear one last time on the field in order to bid farewell to the fans, as he was planning to retire at the end of the season, a victim of chronic back pain. He made his return to the field on September 28th when he pinch-hit in the 5th inning against the Miami Marlins. Facing Jose Urena, he grounded out to third in what was his first appearance in a game since the first half of the 2016 season. He made the final appearance of his career the next day, starting at third base and going 0 for 1 with a walk before being removed in the 5th inning. Counting those two late-career games, he played a total of 1,585, all with the Mets, leaving him shy of the franchise record of 1,853, held by Ed Kranepool, who also spent his entire career with the team. Wright was a much better player by any measure, however.

In January 2019, the Mets announced that Wright would join their front office as a special assistant to GM Brodie Van Wagenen and that they were also removing his name from the 40-man roster, having reached a deal with the insurance company that was responsible for the remainder of his contract.