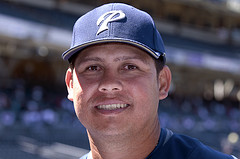 Walter Silva pitched for seven seasons in the minor leagues before making his major league debut with the San Diego Padres in 2009.

Silva had a 5.14 ERA in two games for the Yaquis de Obregon in the 2008 Caribbean Series; he got a no-decision in the start against the Tigres del Licey when the Yaquis handed Licey its lone loss of the Series. He was 0-1 with a 1.80 ERA for Mexico in the 2008 Final Olympic Qualification Tournament, tying Germany's André Hughes for 9th in ERA. Silva had a tough call in that tourney when he had a to face the South Korean national team, yet still wound up one of Mexico's top pitchers on a staff with several former major leaguers.

Silva fell to 7-8, 4.21 in 2008 but Monterrey still made it to the finals before falling to the Mexico City Red Devils. Walter still was picked for Mexico's squad for the 2008 Americas Baseball Cup. He was one of the top pitchers in the event, allowing one run (unearned) in 13 1/3 IP, striking out 27. He led in strikeouts, 10 ahead of runner-up Pablo Morales. He was second in ERA to Johnny Gregorius (also 0.00, but 1 2/3 more innings); Gregorius beat him out for All-Star honors.

Silva made the San Diego Padres' roster out of spring training 2009 and made his major league debut as a starter facing the Los Angeles Dodgers on April 8, giving up two runs in 5 innings of work. In his second start on April 13, he faced the New York Mets as they inaugurated their new ballpark, Citi Field; he hit a single and scored a run as the Padres built an early 5-1 lead, but gave up a three-run game-tying home run to David Wright with two outs in the fifth and left with a no-decision.