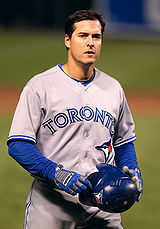 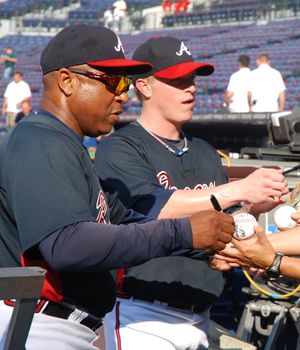 Kelly Johnson was drafted by the Atlanta Braves in the 1st round of the 2000 amateur draft. He was signed by scout Charlie Smith and made his pro debut that summer.

Johnson, who was drafted as a shortstop, began his big league career as an outfielder with the Braves in 2005. He was later converted to second base and enjoyed a couple of fine seasons at the position.

After joining the Arizona Diamondbacks in 2010, he suddenly exploded as a power hitter, hitting 9 home runs to lead the National League in the month of April and being named the league's Player of the Month. He played a career-high 154 games that season, hitting .284/.370/.496 with 26 homers, 93 runs scored and 71 RBI as the D-Backs' number two hitter. He struggled a bit at the plate in 2011, however, and was hitting only .209 in 114 games, with 18 homers, when he was traded to the Toronto Blue Jays on August 23rd in return for 2B Aaron Hill and veteran infielder John McDonald, with the D-Backs holding a slight lead over the San Francisco Giants in the NL West.

Johnson was traded twice during the 2014 season. He started the year with the New York Yankees, taking over at third base for the suspended Alex Rodriguez, but his lack of hitting motivated his team to acquire Chase Headley in July. Now redundant, he was sent to the Boston Red Sox at the trading deadline in return for Stephen Drew in the first trade between the two division rivals since 1997. His stay in Boston did not last long either, as on August 30th, he was sent to the Baltimore Orioles along with minor leaguer Michael Almanzar in return for two players with big league experience, Jemile Weeks and Ivan DeJesus Jr. The Orioles had just lost 3B Manny Machado for the season and needed someone with experience at the hot corner for the postseason. By joining the Orioles, Johnson completed a full tour of AL East members, having earlier played for Toronto and the Tampa Bay Rays. Between the three teams, he hit .215 with 7 homers and 27 RBIs in 106 games.

He moved back to his original team, the Braves, signing as a free agent before the 2015 season. He played 62 games for the Braves, hitting .275 with 9 homers and 34 RBIs while splitting his time between left field, first and third base. On July 24th, he was traded once again, this time to the New York Mets along with 3B Juan Uribe in return for minor leaguers John Gant and Rob Whalen. In his first game for his new team against the Los Angeles Dodgers on July 25th, he had two hits including a home run in a 15-2 rout. His 2016 season was similar as he also started it with the Braves, and ended it with the Mets. He had over 300 at-bats both years, hitting .265 with 14 homers the first, and .247 with 10 homers the second. He appeared in the postseason for the fourth time in 2015, making all the way to the World Series which the Mets lost to the Kansas City Royals. He went 1 for 9 over the three rounds, being used mainly as a pinch-hitter, but was not used as the Mets lost the 2016 Wild Card Game to the San Francisco Giants. He retired after that season.