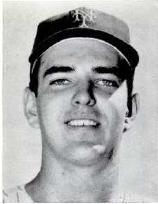 "Steady Eddie" Kranepool played in every New York Mets season from their inaugural season of 1962, when he was a 17-year-old barely out of high school, through 1979. Despite very ordinary career statistics in which he never came close to hitting 20 homers or compiling 100 RBI, this big, strapping hometown New Yorker perfectly fit the new poster boy image of the hybrid and fledgling Mets.

Possessing a valuable left-handed bat, Kranepool was a good first baseman and could play the corner outfield positions as well. He hit .268 against right-handers but only .220 against lefties. He held the Mets club record with 1,488 career hits until David Wright passed him on September 26, 2012.

In 1974, he hit an amazing .486 (17 for 35) as a pinch hitter, which is the highest batting average ever for someone with 30 or more pinch at bats. Kranepool concluded his long career with the Mets at age 34, having logged 18 major league seasons (a Mets record), and is still the club's all-time leader in games played and third on their hits list. He was inducted into the Mets Hall of Fame in 1990.

At the end of his career, Ed starred in several ads for Gillette razors. In 1979, he appeared in a Saturday Night Live sketch during spring training, where former Met great Chico Escuela (Garrett Morris) was attempting to return with the Mets after writing his tell-all memoir, Bad Stuff About The Mets. In 1999, Krane played himself in an episode of Everybody Loves Raymond.