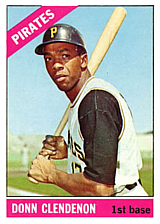 "Getting Donn Clendenon meant a great deal. We finally had a legitimate home run hitter. He hit tons of home runs in batting practice, plus he hit a few for us during the games. With one swing of the bat he could put us in the game or put us ahead. So it was a pleasure to see him there, somebody who could swing the big bat." - Jerry Koosman, to Peter Golenbock, Amazin': The Miraculous History of New York's Most Beloved Baseball Team

First baseman Donn Clendenon was a solid player for the Pittsburgh Pirates for nearly a decade. Later, while with the New York Mets in their miraculous 1969 season, he hit three home runs in the World Series and was named World Series MVP.

Donn had no plans to play baseball as a child, preferring basketball and football. He opted for baseball because his stepfather, Nish Williams (who had raised him after his biological father died when he was six months old), was a former Negro League catcher and manager who loved the game. Williams arranged for Donn to face Satchel Paige and Sad Sam Jones as a youth. After finishing second in his high school class, he earned 12 letters in sports at Morehouse College. At Morehouse, the freshman classes were routinely offered members of a Big Brothers program to help them acclimate to college life. Donn's was a man named Martin Luther King Jr. He got a job teaching in Atlanta and considered offers from the NFL's Cleveland Browns, the NBA's New York Knicks and the famous Harlem Globetrotters. Branch Rickey offered Clendenon a $500 signing bonus and he accepted a deal with the Pittsburgh Pirates in 1957, picking the game his stepfather loved over ones where he could have earned more immediately. He is the only major leaguer to come from Morehouse College through 2019.

Donn made his debut with the Bucs as a September call-up in 1961. With the move of "Dr. Strangeglove" Dick Stuart to the Boston Red Sox after the 1962 season, Donn became a regular in 1963, batting .275/.326/.430 with 15 home runs and 28 doubles. Though he often was among the league leaders in strikeouts, he was an integral part of Pittsburgh's lineup along all-world sluggers Willie Stargell and Roberto Clemente. Donn broke through to another level in 1965 with 89 runs scored, 60 extra base hits and 96 RBI as part of a .301/.351/.467 line. His finest season was easily his 1966 campaign when he hit .299/.358/.520 along with 28 home runs and 98 RBI. With strong hitting Al Oliver pushing forward to break into a starting role, Donn was left unprotected in the ensuing off-season with another wave of expansion coming to the senior circuit.

Selected by the Montreal Expos in the expansion draft, Clendenon immediately found himself embroiled in controversy. Just three months after his selection, Donn was traded to the Houston Astros in January 1969, along with Jesus Alou, in return for Rusty Staub, with the Expos making Staub the centerpiece of their marketing efforts. On March 1st, Donn abruptly announced his retirement, mulling a job offer as an executive with a company manufacturing pens. The Expos, desperate to keep Staub, urged new Commissioner Bowie Kuhn not to cancel the trade, and eventually agreed to send two other players to Houston in compensation just before Opening Day; they also persuaded Clendenon to put off retirement and play for them. While Staub metamorphosed into "Le Grand Orange" and became the Expos first superstar, Donn was adequate in 38 games but thrilled to not be playing in Houston.

At the June 15th trading deadline, Donn agreed to another trade, one that sent him to Queens for five warm bodies, only one of whom (Steve Renko) would do much of anything in the big leagues. Donn brought the Mets a much needed power source and he was one of the key elements in their successful pennant run, hitting 7 home runs during the final 32 regular season games (the Mets won 24 of those games). He was the hero of the Mets' stunning victory over the Baltimore Orioles in the World Series, batting an incredible .357/.438/1.071 with 3 home runs and 4 runs scored, earning Series MVP honors. Donn played two more seasons in New York, with a strong .288/.348/.515 line, 22 home runs and 97 RBI in 1970, before age caught up with him, closing his career as a pinch-hitter with the St. Louis Cardinals in 1972.

Clendenon, who played virtually all his career during the second deadball era, had a very good career line of .274/.328/.442. He had a lot of power, with 159 bombs, although playing eight seasons with the Pirates at cavernous Forbes Field depressed his home run totals considerably.

After retiring from baseball, he earned a Juris Doctor degree from Duquesne in 1978, practicing law in Dayton, OH. He died at 70 after a long fight with leukemia.