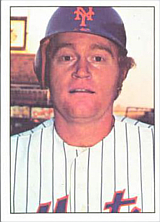 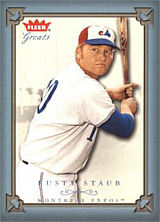 Rusty Staub, dubbed "Le Grand Orange" when he played in Montreal, was part of the fabric of baseball for 23 seasons from 1963 to 1985, ranking 13th on the all-time list in games played. He is the only player in history to collect 500 hits with 4 different clubs.

Staub had the distinction of being the "darling" of two expansion teams: the Houston Colt .45s and the Montreal Expos. He also played for the New York Mets, Detroit Tigers, and Texas Rangers. Staub returned to the Mets in 1981, where he was one of the league's top pinch-hitters through 1985.

Staub was born in New Orleans, LA and signed as a bonus baby with the Houston Colt .45's at the age of 17. At the age of 18, he made an immediate impression with the Durham Bulls of the Carolina League, hitting 23 home runs with a .293 average and being named league MVP. He was up in the majors in 1963, and then came back to the minors in 1964 for the last time, hitting 20 home runs in only 71 games with Oklahoma City of the Pacific Coast League.

Staub had the misfortune to start his major league career in pitcher-friendly Houston in a dead ball era. In his first year in the majors, 1963, he hit .224, but the team average was .220 (and it was not the lowest team average in the league - that honor went to the New York Mets). His .308 slugging percentage was also higher than the team slugging percentage of .301. Staub was 19 years old. 1963 was also the year when Joe Morgan first broke in with the team, a few days after he turned 20. At the time, the oldest players in the league included Stan Musial and Warren Spahn, each more than twice as old as Staub and Morgan and each soon to retire.

Staub became a big star in 1967, when he hit .333 (5th in the National League behind leader Roberto Clemente at .357), and led the league in doubles with 44 (beating Hank Aaron and Orlando Cepeda who were tied for second with 37). He was named to the All-Star team for the first of what were to be five seasons in a row. 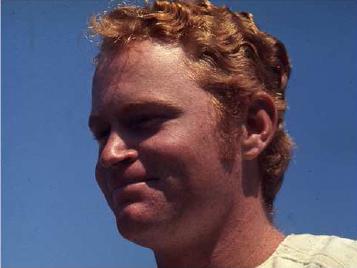 Staub was traded to the Montreal Expos prior to their debut in 1969. The trade was almost voided as one of the players the Expos sent to Houston, Donn Clendenon threatened to retire instead of joining the Astros. But Commissioner Bowie Kuhn accepted Montreal's argument that Staub was the key to the new franchise, and urged the two teams to agree on compensation for Clendenon. A few days before the season started, Montreal convinced Clendenon to sign with them, and sent pitchers Jack Billingham and Skip Guinn to Houston to complete the deal (Jesus Alou was the other player involved, from the beginning of the deal).

With that inaugural Expos squad Staub became a home run hitting star belting 29, good for 8th in the National League. It was the only time in his career that he was in the top ten in home runs. He also hit .302 with 110 walks, a valuable contribution in a league where the overall on-base percentage was only .319. In 1970 he hit 30 home runs and added 112 walks, which were good for 2nd in the NL. In 1971 he fell off to 19 home runs with 74 walks (he still had the highest OPS+ on the team by far with 147). He was the Expos' lone representative at the All-Star Game all three seasons and was by far the biggest star on the team, adulated by all fans. He loved the city back and is one of the few players in Expo history to have a serious go at learning French to relate to the home fans, a gesture that helped his popularity quite a lot.

Then, in a shocking development, he was traded to the New York Mets at the end of the 1972 spring training in return for three young players, Ken Singleton, Mike Jorgensen and Tim Foli, as the Expos tried to fill a number of holes in their lineup at once. Staub spent four years with the Mets, not making the All-Star team any year, but getting 105 RBI in 1975. After 11 years in the big leagues, he finally made it to postseason play in 1973, hitting .423 in the 1973 World Series, which the surprising Mets lost in seven games to the Oakland Athletics; he mostly batted third in the lineup. He was the biggest hitting threat on that Mets' team, hitting .279 with 36 doubles and 15 home runs in the regular season, then slugging 3 home runs in 5 games in the 1973 NLCS.

During his time with the Mets, Staub had a contractual dispute with the Topps company, which was the only one producing baseball cards at the time. As a result, he did not appear in any Topps set from 1972 to 1974, even though he was a major star in Topps' biggest market, at a time when the sets included just about every player in the major leagues, from the loftiest stars to the most obscure bench player.

After the 1975 season, Staub was traded to the Detroit Tigers in another blockbuster (pitcher Mickey Lolich joined the Mets) and played there for 3 1/2 years, driving in 100+ runs in two of the years and coming close (96 RBI) in the other full year. In 1978, he became the first player to play all 162 games in a season without playing the field. He was an All-Star in 1976 for his sixth and final time. He was 5th in the MVP voting in 1978, the closest he would come to an MVP award.

Partway through 1979, he was reacquired by the Expos as the team wanted to bring back a legend to help in their first pennant race. In his first game back in Montreal as an Expo, he was greeted by a standing ovation lasting well over three minutes by 59,000 fans - the largest crowd ever assembled at Stade Olympique - when he entered as a pinch-hitter. While he flied out to right field that time up, overall he hit well, sharing time at first base with Tony Perez. But his inability to play the field limited his value; he was injured trying to catch a pop-up in his first game after being acquired by the Expos. He was traded to the Texas Rangers before the 1980 season, when he hit .300. He then finished out his career playing five more seasons with the New York Mets, hitting .317 in 1981 as the team's starting first baseman and becoming an effective pinch-hitter as he stopped playing much in the field. For example, of 104 games Rusty Staub played in 1983, 5 were at first base, 5 were in the outfield, and a record 94 were as a pinch hitter.

He was a television broadcaster for the New York Mets from 1986 to 1995. He was also a restaurant owner, and for a time in the late 1990s operated a restaurant at Stade Olympique in Montreal called Rusty 10 (after his uniform number, 10, which was the first retired by the Expos). He also owned a restaurant named "Rusty's", located on 3rd Avenue in Manhattan. In 1986, he was inducted into the New York Mets Hall of Fame.

Rusty later headed the Rusty Staub Foundation, a major program of which is the seven emergency food pantry locations in the five boroughs of New York City that serve over 600,000 meals a year. He also raised money for the children of police officers and firefighters killed in the line of duty. In early October, 2015, he suffered a heart attack on a flight from Ireland to New York; the flight had to be diverted back to Ireland where he was hospitalized. He died less than three years later, just before Opening day in 2018.

The question whether Staub belongs in the Hall of Fame is an interesting one. He played in 2,951 career games, and every player with 2,750 has gotten into the Hall (except for Pete Rose who is not eligible, Barry Bonds and Omar Vizquel). He has 1,466 RBI, and up to now every player with 1,400 RBI who has been fully considered has gone into the Hall. He has 499 doubles, and every player with 500+ doubles who has been fully considered has gone into the Hall (In both the case of the RBI and of the doubles, there are a number of players, who, like Staub, are being evaluated and may or may not get in). A sign of his remarkable longevity is that he is one of only three players - Ty Cobb and Gary Sheffield are the others - to hit a home run as a teenager and after the age of forty.

On the other hand, Staub did not reach any of the obvious markers of Hall of Fame qualification - he did not get to 3,000 hits, or 500 home runs, and he never won an MVP award or led the league in batting average, home runs or RBI. Still, the most similar player to Staub (using the similarity scores method) is Tony Perez, who did get into the Hall of Fame.

One of the outstanding contact hitters of all-time, Staub had a great eye for the strike zone as reflected by his high career OBP. Only five players have more hits and have not made the Hall of Fame. Rusty played on last-place teams for much of his career and was often pitched around. On better teams, he would have likely walked less and might have reached 3,000 hits.

He was considered by the BBWAA and his highest vote total was 8%. It will be up to the Veterans Committee as to whether Staub eventually gets in. In 2012, he was named to the Canadian Baseball Hall of Fame in recognition of his tremendous impact and popularity during the early days of the Montreal Expos.