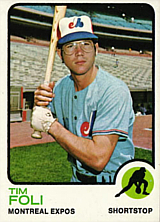 Shortstop Tim Foli was the first overall selection in the 1968 amateur draft by the New York Mets. He was blocked in New York by Bud Harrelson, a very similar player, and just before the start of the 1972 season, was one of three promising youngsters, along with 1B Mike Jorgensen and OF Ken Singleton - traded to the Montreal Expos in return for All-Star OF Rusty Staub. Foli was immediately installed as the Expos' regular shortstop and played almost every day for the next five seasons. He was well-known for his fiery temper while a player. Unusual even by the day's standards, he had great bat control by batting almost exclusively choked up. In 1979, he led the National League in being hardest to strike out and in sacrifice hits. On the down side, his power was minimal, and he did not draw many walks.

On April 21-22, 1976, he became the first Expos player to hit for the cycle, in a game against the Chicago Cubs. He got the four hits in order - single, double, triple and homer - but the game was a weird one at Wrigley Field, as it was delayed repeatedly by rain, and by the time Foli came up in the 5th, the Expos had a big lead and just wanted to get the game over with. Thus, when he hit a line drive to the left field corner, he kept on running until easily tagged out at home, getting credit for a triple. The game was stopped an inning later, but because of darkness, not rain, so it was resumed the next day, giving him a chance to homer off Buddy Schultz to complete the cycle. That year marked Foli's best offensive season thus far, but he clashed repeatedly with rookie manager Karl Kuehl, who was fired before the end of the season. As a fallout from his numerous temper tantrums, he was traded to the San Francisco Giants in a straight up deal for SS Chris Speier a couple of weeks into the 1977 season.

The deal marked the beginning of Foli's descent into journeyman-ism. Over his final nine seasons, he spent seven different stints with six different teams. His arrival to the Pittsburgh Pirates, as a player to be named later in a deal for Frank Taveras, came just in time to earn a World Series ring as a member with the "We Are Family" squad in 1979. It was back in Pittsburgh, in 1985, where his big league days came to a close, batting a mere .189 in 19 games before earning his release.

After his playing career ended, he was a Texas Rangers coach in 1986 and 1987 and a member of the Milwaukee Brewers coaching staff from 1992 through 1995. He spent 1996 on the Kansas City Royals staff. Foli was the New York Mets' minor league infield/baserunning coordinator from 1998-2000 and moonlighted as the manager of the Kingsport Mets in 1998. From 2001 to 2003, Foli was a Cincinnati Reds coach and was skipper of the New Orleans Zephyrs in 2005 and 2006. He was the Washington Nationals Minor league field coordinator in 2007, managed the Columbus Clippers in 2008 and the Syracuse Chiefs in 2009.