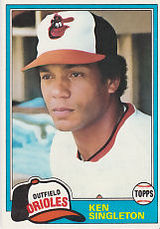 Ken Singleton, who played 15 seasons in the major leagues, was in the top three in Adjusted OPS+ in the American League each year from 1977 to 1979. His career Adjusted OPS+ ties him with Rocky Colavito, Tony Gwynn, and Mo Vaughn.

He holds the record for hits in consecutive at bats, with 10. Over the course of three games, Singleton went 4 for 4 twice (on April 26 and 27, 1981) and then hit safely in his first two at bats in a third game (on April 28) before finally hitting into a double play in his third at bat against Richard Dotson.

In 1979, Singleton became the second switch-hitter in the AL to hit 35 homers in one season, after Mickey Mantle. Since that date, Mark Teixeira and Nick Swisher have done the same.

The similarity scores method sees Dusty Baker as the most similar player, but Singleton has a much higher Adjusted OPS+.

Singleton was a Montreal Expos broadcaster from 1985 to 1996 and has been a New York Yankees broadcaster since 1997, covering games on both the MSG Network and the YES Network.