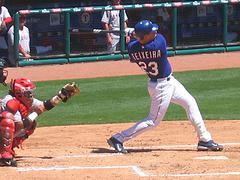 Teixeira attended the Georgia Institute of Technology at the same time as Cory Vance and was drafted as the fifth pick in the first round of the 2001 amateur draft. When he started in the minors in 2002, he slugged nearly .600 at two stops as a third baseman and became a major league regular for the 2003 Texas Rangers.

Mark was with the Rangers through July 31, 2007, when he was traded to the Atlanta Braves. During his time with the Rangers he was their regular first baseman although he also played some outfield, DH and (in 2003) third base. He made the All-Star team in 2005, and hit a home run in the All-Star Game that year. In 2005 and 2006 he won Gold Gloves for his work at first base.

He led the 2005 American League in total bases, was fourth in home runs, and second in RBI.

After being traded to the Braves in 2007, Teixeira spent the remainder of that season (54 games, slugging .615) and most of the 2008 season with the Braves before again being traded in late July, this time on July 29th, to the Los Angeles Angels of Anaheim who went on to win their division. Teixeira had the highest slugging percentage on the team in the 54 games he played for the Angels. Teixeira was a sensation for the 2008 Angels in roughly the way that Manny Ramirez was a sensation for the 2008 Los Angeles Dodgers. Like Teixeira, Ramirez came to Southern California in a trade in late July and hit a ton for a division-winner.

Teixeira hit .467 in the 2008 American League Division Series which the Angels lost to the Boston Red Sox. 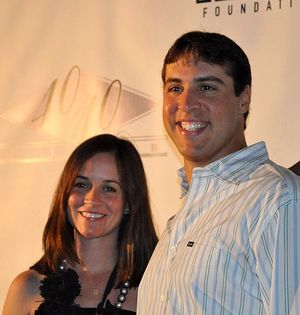 Mark and his wife Leigh

In late December 2008, Teixeira signed a contract as a free agent with the New York Yankees for an eight-year term, making him one of the highest-paid players in baseball. The Baltimore Orioles had also sought Teixeira, who is from Maryland, but could not compete with the Yankees' offer. After a slow start, Teixeira took his accustomed place among baseball's best sluggers in his initial season in pinstripes. He hit .292/.383/.565 in 2009, with 43 doubles, 39 homers, 122 RBI and 103 runs scored. He led the AL in total bases (344), home runs, RBI and extra-base hits while forming a formidable tandem in the middle of the Yankees' batting order with Alex Rodriguez. He was a leading candidate for the MVP Award, finishing second in the voting behind Joe Mauer of the Minnesota Twins, and picked up both a Gold Glove and a Silver Slugger Award at first base while being named to the All-Star team. He was not as hot during the post-season, but still contributed 2 home runs, 10 runs and 8 RBI towards the Bronx Bombers' conquest of their first World Series title since 2000. 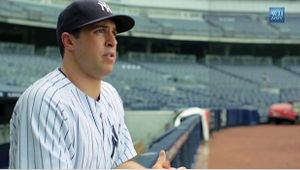 Teixeira with the Yankees in 2011.

In 2010, Teixeira hit .256 with 33 homers and 108 RBI in his second season as a Yankee. Inspite of the relatively low batting average, he led the American League with 113 runs scored. He had four hits including a homer as the Yankees swept the Minnesota Twins in the ALDS, but was hitiless in 14 at-bats in the ALCS, when the Yankees bowed out to the Texas Rangers. On August 2nd, 2011, Teixeira hit homers from both sides of the plate for the 12th time in his career in a win over the Chicago White Sox, giving him the all-time record ahead of Eddie Murray and Chili Davis. The two long balls also gave him his 8th consecutive 30-homer season. He finished the year at .248, buth with 39 homers and 111 RBI while scoring 90 runs. He again struggled in the post-season, going 3 for 18 with 1 RBI as the Yankees were upset by the Detroit Tigers in the ALDS.

In 2012, he continued at the level of his two previous seasons, with a relatively low batting average combined with a lot of walks and decent - but not overwhelming - power. However, his season was derailed when he suffered a calf injury on August 27th. He rested for a few days and came back on September 8th, but aggravated the injury as he made the final out by grounding into a game-ending double play in a 5-4 loss to the Baltimore Orioles. By then, the Yankees were in a tight pennant race with the Orioles and the Tampa Bay Rays, but had to make do without their first baseman as the injury kept him sidelined until the end of the month. He finished the season with a .251 average, 24 homers and 84 RBI in 123 games. He was back in health for the postseason, going 6 for 17 with 5 walks as the Yankees defeated the pesky Orioles in the ALDS, but then, like most of his teammates, his bat went quiet against the Detroit Tigers in the ALCS, as he went only 3 for 15 with no RBI and the Yankees were swept in four games.

Teixeira was counted on as one of the pillars of the Yankees heading into 2013, with the team racked by health concerns. He was scheduled to start at first base for Team USA in the 2013 World Baseball Classic, but a couple of days from the team's first game, he was scratched from the roster because of a strained right wrist, putting another question mark over the Yankees' upcoming season, especially after it was announced on March 6th that he would be unavailable until May. Teixeira set May 1st as his target date to make his return to the Bronx, but by late April, it was clear that that timetable was too optimistic, as he was still far from 100 percent and unable to take live swings yet. After a rehabilitation stint in the minor leagues, he finally made his season's debut on May 31st, going 0 for 3 with a walk in the Yankees' 4-1 win over the Boston Red Sox. On June 3rd, he hit his first long ball of the season, his 8th career grand slam against Justin Masterson of the Cleveland Indians to lead the Yankees to a 7-4 win. However, on June 15th, he left the Yankees a day before the end of a trip to the West Coast in order to return to New York and have his right wrist examined by a doctor again. The wrist was preventing him from taking his normal batting practice routine, and completely sapping his hitting from the left side, as he was batting .086 against right-handers at that point. He was placed on the DL again then on June 26th had to accept the fact that he would require season-ending surgery to fix the problem. All he had to show for the season was a .151 average, 3 homers and 12 RBI in 15 games.

After completely losing the previous season, Teixeira was happy to be back in the Yankees' Opening Day line-up on April 1, 2014. Sliding down from the clean-up spot, now occupied by C Brian McCann, to fifth in the batting order, he went 2 for 3 with a walk and a RBI in a 6-2 loss to the Houston Astros. In only the fourth game of the season, on April 4th, however, he left a game against the Toronto Blue Jays with a strained hamstring, having aggravated a preexisting condition in trying to run down a foul ball. He was placed on the DL the next day. He did come back to play 123 games, but his performance was not up to the level of previous years, as he only hit .216, his lowest average in a full season, with 22 homers and 62 RBIs. However, he hit only 14 doubles and his slugging percentage was at .398, both also well below his career norms. In 2015, he was healthy and the Teixeira of old showed up. He made the All-Star team for the first time since 2009 and hit 31 homers with 79 RBIs, improving his slugging to .548. On July 31st, he hit home runs from both sides of the plate in the same game for the 14th time, once again laying sole claim to the all-time record by himself, but he was caught three weeks later by former teammate Nick Swisher who also accomplished the feat for the 14th time. He played almost every day until mid-August but on August 17th, he went on the disabled list with what was originally diagnosed with a bad bruise after fouling a game off his leg. In September, the Yankees announced that the injury was in fact a fracture and that he was done for the season, having played 111 games.

Coming back at the start of the 2016, it was the young player who had filled in ably for him in the last six weeks of the previous season, Greg Bird, who was out for the year. Mark started off slowly, as he was hitting only .195 with 3 homers and 12 RBIs after 42 games. That is when he began to experience neck problems, forcing him to miss a number of games in May as a result. In early June, he was placed on the disabled list with knee pain with the team brass fearing that he may need season-ending surgery to correct the problem. He cam back at the end of the month, after a stretch during which the Yankees struggled to find a replacement for him, giving starts at first base to Dustin Ackley and Rob Refsnyder, two converted middle infielders, and bringing up veterans Chris Parmelee and Ike Davis from the minors. On July 3rd, Teixeira hit homers #400 and 401 of his career in a 6-3 win over the San Diego Padres. He hit a solos hot off Carlos Villanueva to lead off the 8th for #400, then in the 9th connected off Kevin Quackenbush with Brett Gardner on base. He was only the fifth switch-hitter in history to reach the 400-homer mark. On August 5th, he announced that he would be retiring at the end of the season. He finished the year at .204 in 116 games, with 15 homers and 44 RBIs.

After retiring, Teixeira began to devote his time to a very ambitious project: trying to rehabilitate a polluted waterway near downtown Atlanta, GA, Proctor Creek, in order to turn the surrounding area into a park called the "Emerald Corridor". The project includes cleaning up some 400 acres of land along the creek's seven-mile course as it flows into the Chattahoochee River, an area that is covered with litter and debris, while the creek's water is contaminated with industrial run-off and sewage overflow.

Teixeira was a steady hitter who never had a bad year until age and injuries began to catch up with him in 2013. He hit for power and drew walks well and had a solid batting average until age 30, when he settled into being a .250 hitter when healthy (he was below that in the years when he was bothered by various injuries). His fielding ability is shown by the five Gold Gloves he won. In his first seven years in the majors he twice finished in the top ten in MVP voting (he was 7th in 2005 and 2nd in 2009) and found a place among league leaders in major offensive categories. He retired with a .268 average, 409 homers and 1298 RBIs in 1862 games, his late-career injuries costing him a chance to reach milestone numbers such as 500 home runs or 1,500 RBIs.

When he retired, there were no Hall of Famers on the list of the ten most similar players (according to the similarity scores method). However, the most similar player on the list, Gil Hodges, held the record for the highest percentage of the BBWAA vote received by a player who failed to get into the Hall - the very definition of a borderline Hall of Fame candidate. The list was dominated by slugging first basemen who all fell short of Hall worthiness in spite of some nice years, like Mark, but no one was truly similar as Hodges was the only one to post a score of 900 or above, and barely at that as he was at 901.2. In his only presence on the Hall of Fame ballot, in 2022, he received only a handful of votes, representing just 1.5%, and his name was dropped.

After his playing career ended, he returned to Georgia Tech to finish his degree.