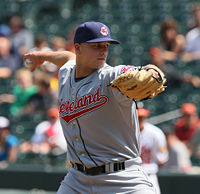 Pitcher Justin Masterson was selected by the Boston Red Sox in the second round of the 2006 amateur draft. He was signed by scout Dan Madsen and made his pro debut that summer with the Lowell Spinners, posting a 3-1 record and a minuscule 0.85 ERA in 14 appearances out of the bullpen. He began 2007 with the Lancaster JetHawks and was 8-5 with a 4.33 ERA in 17 starts there before being promoted to the Portland Sea Dogs, for whom he went 4-3 with a 4.34 ERA in 10 starts.

Masterson began 2008 back with Portland, allowing just 2 earned runs in his first 4 starts. When the flu bug hit the Red Sox pitching staff in April, he was called up for a start against the Los Angeles Angels on April 24th. He allowed one earned run in six innings, but Boston lost the game when the team gave up 4 runs in the seventh. He was then sent back to Portland. Masterson made 8 more starts in Boston, but was then converted into a reliever, with a view of taking over Mike Timlin's role in the bullpen. This is how he was used down the stretch, posting a solid 3.16 ERA in 88 ⅓ innings. He was a key pitcher during the postseason, being used 9 times in two series, and winning one game in the ALCS against the Tampa Bay Rays. He only gave up 2 earned runs in 9 ⅔ innings, while being used in all manner of situations by manager Terry Francona, who was short of reliable pitchers.

In spring training of 2009, Masterson worked out as a starter, although he was in the bullpen to start the year. That changed when Daisuke Matsuzaka was placed on the disabled list after two starts, leaving his spot in the rotation open for Masterson. The youngster took advantage of the opportunity by winning his first two starts in convincing fashion. He was traded to the Cleveland Indians in the deal that brought C-1B Victor Martinez to Boston later that season. However, he struggled for Cleveland, going only 1-7 with a 4.55 ERA as a full-time starter, for a combined record of 4-10, 4.52 on the year.

Justin had another difficult season as a starter for the Indians in 2010, as he finished the year at 6-13, 4.70, even though he showed some flashes of brilliance. Things improved significantly in 2011, when he went 12-10 with a solid ERA of 3.21 in 34 games and pitched over 200 innings for the first time. He had a bit of a setback in 2012, as he continued as a workhorse, being tied for the American League lead with 34 starts. His ERA jumped to 4.93, and his won-loss record was 11-15 although he once again pitched over 200 innings. However, he put it all together early in the 2013 season, making the All-Star team and finishing the year at 14-10, 3.45. His 3 shutouts were tied for the AL lead, but he was injured down the stretch and pitched out of the bullpen after he returned. This corresponded with the Indians' surge to a postseason slot and he pitched a couple of innings in relief as the Indians lost to the TamPa Bay Rays in the Wild Card Game.

Now the Indians' undisputed pitching ace, Masterson was the opening day starter in 2014, but he regressed badly. His record stood at 4-6, 5.51 after 19 starts when he went on the disabled list with a sore right knee. Before the injury, his velocity was down significantly, and Corey Kluber had passed him as the Indians' number 1 pitcher. Just as he was about to come off the DL on July 30th, he was traded to the St. Louis Cardinals in return for outfield prospect James Ramsey, a surprising move given the Indians were still in the hunt for a wild card spot. He was a winner in his debut for the Cards on August 2nd, defeating the Milwaukee Brewers, 9-7, even though he gave up 5 runs in 6 innings. He went 3-3 for St. Louis, but with a very high ERA of 7.04 and was left off the postseason roster. Overall, he was 7-9, 5.88 for the season. He became a free agent and on December 11th signed with the Boston Red Sox, returning to the team with which he had started his career with the hope of putting things back on track. However, he continued to struggle with the Red Sox in 2015. He was 4-2 in 18 games, including 9 starts, but gave up 68 hits and 27 walks in 59 1/3 innings, for an ERA of 5.61. On August 9th, he was designated for assignment by Boston.

Masterson was born in Jamaica because his father was a Christian missionary on the island.