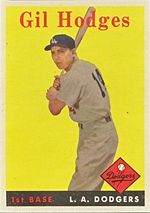 "No one had more impact on my career than Gil Hodges." - Tom Seaver, speaking about Gil Hodges the manager

Gil Hodges was a major star during his career, and achieved additional fame after his death as the player who has gotten the most Hall of Fame votes without getting in - until he was finally elected by the Veterans Committee in 2022.

In the first half-century of Hall of Fame voting by the BBWAA, almost every individual who ever finished in the top ten eventually ended up getting enshrined. He was almost the only person to make the BBWAA top ten more than once in that period without being enshrined. Even more amazingly, he didn't just sneak in with a few 9th and 10th place finishes. He routinely finished in the top five in his years on the ballot.

Hodges was signed by the Brooklyn Dodgers in 1943, and got into one game with them that year, as a third baseman. He was a great hitting prospect, but did not have a position on the field, and the Dodgers planned to turn him into a catcher. But immediately after his debut, he missed a few years serving in the Marines; he was stationed on Pearl Harbor, Tinian and Okinawa as a gunner in World War II. He did not come back to the majors until 1947, when he was a catcher in 24 games. The following year he was gradually converted to a first baseman, because the Dodgers had signed the great Roy Campanella out of the Negro Leagues to be their catcher. 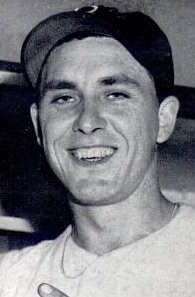 The Brooklyn Dodgers of the time were a team of great hitters (playing in a hitters' park), with Roy Campanella a three-time MVP, Jackie Robinson winning the MVP award in 1949, Duke Snider finishing in the top 5 in the MVP voting several times, Pee Wee Reese, Carl Furillo (the 1953 batting champion), and others. The team went to the World Series in 1947, 1949, 1952, 1953, 1955, 1956, and 1959. It was a hard team on which to stand out. This period was interrupted by a major slump that started late in the 1952 season, lasted through the entire 1952 World Series, when he went hitless in 21 at bats, and through the first month of 1953. Hodges finally snapped out of it when manager Chuck Dressen used film clips of his at bats to show him he was bailing out (moving his front foot towards third base) on pitches. He corrected the problem by changing the position of his back foot, although he always remained vulnerable to right-handed pitchers with a good curve ball. Hodges had an extra-base hit in 8 consecutive games in 1952.

Hodges never won the MVP Award (he never finished higher than 8th in the voting), although he was a frequent All-Star with 8 appearances and also won some Gold Gloves (3 times from 1957 to 1959). He never led the league in homers or RBI, although he finished in the top 5 in each category four times.

Hodges holds the Major League record for most sacrifice flies in a season, hitting 19 in 1954. That was the first year sacrifice flies became a modern statistic applying uniformly to both leagues.

The Dodgers left Brooklyn in 1958 to move to L.A., and that undoubtedly hurt the numbers that Hodges put up. However, in 1959 he did post a .513 slugging percentage for a Dodger team that won the World Series.

He became a back-up (along with Duke Snider, who also didn't age well) on the 1960 and 1961 Dodger teams, and then became an original member of the New York Mets on the 1962 expansion team. In 1963, he started the season as a player, and then after being traded to the Washington Senators he retired as a player to become their manager.

He managed the hapless Senators for 5 seasons, picking up Frank Howard from the Dodgers to be the Senators' slugger. Then, moving to the New York Mets, he managed for four seasons, including being at the helm for the Miracle Mets season in 1969. His most notable player was the young Tom Seaver.

Hodges died of a heart attack during spring training just before the start of the 1972 season, and two days short of his 48th birthday. He had survived a first attack in September 1968. He died after playing golf with his coaches in West Palm Beach, FL. The golf course was owned by former major league pitcher Jack Sanford.

After his retirement and untimely death, he became the focus of decades-long Hall of Fame consideration. The argument for his enshrinement was basically that he hit close to 400 home runs on a famous team that consistently went to the World Series. If more was needed, supporters could point to his managerial success at the helm of the Miracle Mets, and also to the fact that he missed several years of a budding career due to World War II.

On the negative side, he was never close to being an MVP, never led the league in any hitting category, and none of the ten most similar players using similarity scores are in the Hall of Fame.

The most similar players are Norm Cash and George Foster, although Rocky Colavito, who is a bit lower on the list, comes to mind as a very similar player.

He was inducted into the Indiana Baseball Hall of Fame in 1979.