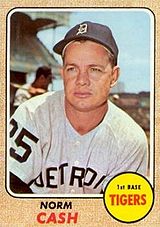 “Whenever you mention Norm Cash, I just smile. He was just a fun guy to be around and a great teammate. He always came ready to play." - Al Kaline 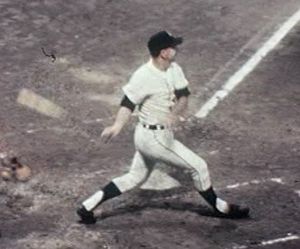 Cash at bat in a game against Chicago in the 1960s

Norm Cash hit 377 home runs in a 17-year-major league career, mostly with the Detroit Tigers. He is best remembered for his great performance in 1961, an expansion year, when he hit .361 with 41 home runs.

Something often overlooked was "Stormin' Norman's" defensive prowess. Though not tall and rangy for a first baseman, he was quick and sure-handed - an especially deadly fielder chasing foul pop-ups behind first base. As was obvious to any Tiger fan, this guy was a big kid at heart and really enjoyed playing the game. If given no other alternative, he likely would have played for just bread and water.

Not unlike many sluggers, he also struck out his share of times.

"Pro-rated at 500 at-bats a year - that means that for two years out of the fourteen I played, I never even touched the ball." - Norm Cash

It became common to think of Cash as more or less a single-season star, rather than a continual league leader. While it is true that he never again came close to the Adjusted OPS+ of 201 that he had in 1961, his career OPS+ of 139 puts him tied for 81st with Reggie Jackson, Jason Giambi, Jeff Heath and "Indian" Bob Johnson on the all-time list. The most similar player to Cash is Gil Hodges, who has an OPS+ of 120; while Hodges is constantly close to getting enough votes for enshrinement in the Hall of Fame on Veteran's Committee ballots, Cash gets no attention.

Cash, whose personality was marked by candor and humor, confessed in later years that he used corked bats, but throughout his career, not just the magical 1961 season. Corked bats are illegal in baseball. Players seeking an edge have broken the rule for decades. (Bart Giamatti, whose short tenure as commissioner of baseball is remembered for banning Pete Rose, encouraged a fellow Yale professor to write a small, but terrific book. His conclusion was that a corked bat was a marginal substitution of mass for speed that didn't amount to much. See The Physics of Baseball, Robert K. Adair.)

Cash missed the 1957 season due to military service. He was the 1959 Caribbean Series Most Valuable Player and played for the Chicago White Sox in their pennant-winning 1959 season, hitting .240 in 58 games. The White Sox acquired aging slugger Ted Kluszewski late in the year to play first base, and Cash went 0 for 4 in the 1959 World Series against the Los Angeles Dodgers. He was inexplicably dealt to the Cleveland Indians after the season, and then inexplicably dealt again to the Tigers just before the start of the 1960 season, when he became a regular for the first time. He made five All-Star appearances with Detroit, winning a World Series in 1968 before playing his final season in 1974.

Cash was always a popular player with Detroit fans and remained in the area after he retired. He drowned while on vacation at Beaver Island, Michigan, apparently falling in the water while returning to his boat late in the evening.