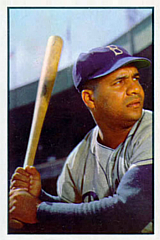 "Roy Campanella came up to the Dodgers during the season and I could see he was a great catcher. He'd get your eye. He was kind of a roly-poly guy with that gear on, but he moved good for his size and he hit, threw and received the ball so well. He did everything good. He was also a great guy, an ideal man to have on a ballclub." - Andy Seminick, to Danny Peary, We Played The Game 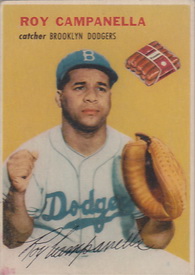 A three-time Most Valuable Player with the Brooklyn Dodgers, Roy Campanella is routinely listed among the best major league catchers of all-time.

Campanella was the son of a Sicilian father named John and an African-American mother named Ida. He grew up in the Nicetown neighborhood of Philadelphia, where he played sandlot ball for Nicetown Colored Athletic Club or the Nicetown Giants. He also played American Legion ball with Loudenslager Post No. 366. A high school star in Philadelphia, he was reportedly invited for a tryout for the Philadelphia Phillies before they discovered he was black.

In 1937, a 15-year-old Roy signed with the Baltimore Elite Giants, quitting high school to study catching under Hall of Famer Biz Mackey. Roy later credited Mackey with teaching him everything he knew. He played sparingly in 1938 and hit .273 in 1939. Mackey was dealt that year to the Newark Eagles and Campy became the starter. Roy hit .310 with a homer in a dramatic postseason game against the legendary Josh Gibson and the Homestead Grays; Josh, in the prime of his career, clearly outperformed the youngster at the plate. Campanella played in the Puerto Rican Winter League in 1939-40 and hit .263 with 8 homers, tying for the league lead with Buck Leonard. At age 18 in 1940, Roy hit .284 with 5 home runs in 88 at bats, splitting catching duties with Bill Perkins. Campy emerged as a star in 1941, hitting .338 (fifth in the Negro National League), batting fifth in the order. He started for the East in the 1941 East-West Game, going 1 for 5 with an error while hitting sixth.

Suspension and flight to Mexico[edit]

Back to Baltimore and winter ball in three countries[edit]

After hitting .266 in the 1943-44 Cuban Winter League, Campanella rejoined Baltimore, having patched up his differences. He was the club's offensive leader, batting .437. He made the East team for the 1944 East-West Game, but was on the bench as Gibson started. Campanella came on as a pinch hitter and stayed in at third base, going 1 for 2 with a run scored and RBI. He hit .294 that winter in the Puerto Rican Winter League. In the 1945 season, Roy hit .290 for Baltimore and also won a game as a pitcher. His 7 doubles were third in the Negro National League and his 4 homers tied for third, though he was 7 behind the leader, Gibson. In his last East-West Game, he went 2 for 5 with a run scored as the East's catcher and was voted game MVP by journalists and given the Olde Tymer A.C. Trophy. Overall, he hit .333/~.333/.333 in 12 at bats in three East-West games. He hit a very disappointing .211 in the Venezuelan League that winter. Campanella learned to speak Spanish rather well thanks to this winter ball exposure. He would later help Spanish-speaking teammates such as Sandy Amorós.

Roy joined Jackie Robinson as one of the first black players signed by Branch Rickey to the Brooklyn Dodgers at the end of 1945/beginning of 1946. In 1946, Campanella and Don Newcombe integrated the New England League. Playing for the Nashua Dodgers, the backstop batted .290/~.393/.477 with 96 RBI, 16 steals, 64 walks, 75 runs scored, 8 triples and 13 homers. He finished second to Mo Mozzali in RBI and helped Nashua to the title, winning the MVP award in the process. He played for San Juan in the Puerto Rican Winter League and only batted .222 in 45 at-bats. In 1947, Campy batted .273/~.368/.432 with the Montreal Royals as they finished just one-half game behind the pennant winners. Rickey next selected Roy to integrate the American Association. Roy was hitting .325 with 13 homers for the St. Paul Saints when he was finally called up to Brooklyn. 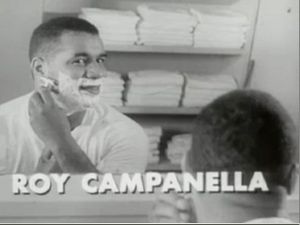 Campanella seen in a commercial for Gillette Super-Speed Razors

One of the top sluggers of the era, Roy finished third in the NL in homers twice and fifth once. He led the NL once in RBI (his '53 MVP season) and was in the top five in OPS three times. During his career, he established himself as arguably the greatest NL catcher in history, at least in terms of offense, with Gabby Hartnett being the closest competition. Campanella also suffered his share of injuries, as is often the case with catchers. As a result, he had some off years, three times posting an OPS+ under 90 and twice hitting under .220. Overall, in ten seasons, he hit to a .276/.360/.500 line with 242 home runs, 856 RBI and 627 runs scored in 1,215 games.

Campanella was also a superior defensive catcher. A Retrosheet study found that he nailed 57.4% of opposing base stealers during his career. That is by far the best figure of any catcher in the survey, which covered the period from 1957 onward (although play-by-play data was available for all of Campy's career).

Through 2019, he is one of only 16 major leaguers to catch three or more no-hitters:

Roy made two appearances on Person to Person with famed newsman Edward R. Murrow. He was featured on episodes airing October 6, 1953 and January 2, 1959. He was the mystery guest on the classic series What's My Line? airing September 6, 1953. He coached Timmy Martin's team on a 1959 episode of Lassie and was once honored on the classic This Is Your Life. In song, he is name dropped in "Did You See Jackie Robinson Hit That Ball?" as well as Billy Joel's ode to throwing a bunch of things together over music sequentially, 1989's "We Didn't Start The Fire".

Campy's autobiography, It's Good To Be Alive, was published in 1959. A heavily fictionalized version was turned into a 1974 made for TV movie starring Paul Winfield and directed by Michael Landon. In 2011, a biography of his life was penned by Neil Lanctot titled Campy -- The Two Lives of Roy Campanella.

End of career and afterward[edit] 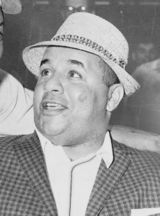 On January 28, 1958, Campanella was involved in a career-ending automobile accident that left him permanently paralyzed. He never played a game in the majors after age 35. He played for the last Brooklyn club and never played for a Los Angeles Dodgers team.

Roy was a surprisingly busy man after he got out of the hospital in late 1958. His health was delicate, but he was still tending to his business ventures (and the misadventures of his wayward stepson, David). He attended spring training at Vero Beach and went out to L.A. for a big night in his honor at the Los Angeles Coliseum on May 7, 1959; attendance was 93,103. He appeared at Yonkers Raceway on July 1st. In August, he even acted in an episode of the TV show Lassie. Among all these other activities, he fit in the formation of a semipro ballclub at Ebbets Field called the Brooklyn Stars.

Campy was elected to the Hall of Fame in 1969. On June 4, 1972, his #39 was retired by the Dodgers. Before he died of a heart attack on June 26, 1993, he had continued to serve as an instructor at spring training and as a member of the Dodgers' community service division in Los Angeles. His grandson, Derek Williams [1], also a catcher, played two years in the minors.

Roy is highlighted in Heroes Behind the Mask and countless publications as one of the top catchers of all-time.

When Campanella was elected to the Hall of Fame in 1969, he was one of Cooperstown's first black inductees. He was voted into Mexico' Salon de la Fama two years later, an interesting choice. While other Negro League stars like Gibson and Monte Irvin were voted into the Salon based on one or two season careers, they had dominant years, whereas Campanella had merely been "good" in his one-and-a-bit seasons in Mexico.

He was honored by the U.S. Postal Service with a commemorative stamp in 2006 [2]. Later that year, the Dodgers created the Roy Campanella Award, given annually to the player that best exemplifies Campy's leadership and spirit.