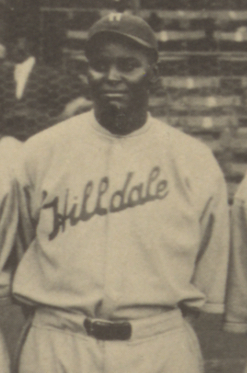 A career .329 hitter, Biz Mackey ranks 14th in Negro League history. He originally came up as a shortstop - in 1923 he split time at short with Pop Lloyd on the Hilldale Club, taking over for Lloyd when Frank Warfield replaced Lloyd at manager. Mackey led the league in batting average with a .413 mark as the Hilldales won the Eastern Colored League title.

Mackey was Hilldale's main shortstop in 1924, when the team again won the ECL pennant; Mackey finished 3rd in batting average and doubles. That year they lost the inaugural Negro League World Series to the Kansas City Monarchs 5 games to 4, with one tie.

In 1925, Hilldale won its third consecutive ECL title. Mackey hit .341 but more importantly moved to catcher on a full-time basis, where he would become acclaimed as the top defensive catcher in the history of the Negro Leagues. Hilldale gained revenge against the Monarchs in the Series, winning 5 games to 1 with Mackey batting .360.

A year later Hilldale slipped to second, but Mackey kept hitting - tied for the league lead with 20 doubles, tied for 3rd with 10 homers and even leading the league with 14 stolen bases.

Mackey spent the 1932 season touring overseas, including a long stay in Japan which supposedly played a major role in inspiring the formation of pro baseball in that country. Mackey's stats declined significantly when he returned to the States in '33, never really returning to former levels.

In '34, the Stars were the champions of the combined East-West League and Mackey had another fine post-season as they beat the Chicago American Giants 4 games to 3. At age 37, Mackey was in decline offensively, though still productive.

After a couple years with the Washington Elite Giants, he moved with the team to Baltimore in 1938; Mackey, at age 41, got new life as the mentor to a young Roy Campanella. Campy later credited Mackey with teaching him basically everything he knew about catching, and was a big exponent of Mackey's talent.

In '39, Mackey moved to the Newark Eagles during the season, allowing Campanella to become a starter for the Elites. A year later Mackey replaced Dick Lundy as manager of the Eagles, while still being the regular catcher at 43 years of age. Mackey's managerial career didn't last long (writer Donn Rogosin editorialized that Mackey's ethics conflicted with owner Effa Manley's style) - by 1942 he was out of the helm at Newark and no longer playing regularly after 20 years in the Negro Leagues. He returned to Newark as a player in 1945 and became manager in 1946, leading the team to its only World Series victory that year. He managed the team in 1947, and then retired. Mackey also managed the East in the first 1947 East-West Game and pinch-hit on his 50th birthday; he was given a free pass by Gentry Jessup.

In documented games against white major-leaguers, Mackey hit over .350.

Mackey was also a long-time regular in the California Winter League, playing there for a record 26 seasons. He holds the all-time league records for doubles (62) and triples (17, tied with Tank Carr). His 28 homers rank third behind Mule Suttles and Turkey Stearnes and he was 6th all-time in average, .366.

After many years of being advanced as a Hall of Fame candidate, Mackey was elected to the Hall of Fame in 2006. He is generally ranked as the #2 catcher all-time in Negro League history, and fans of defense at catcher have rated him ahead of Josh Gibson. Some contemporaries clearly ranked Mackey ahead of Gibson - in the first East-West Game in 1933 Mackey started ahead of Gibson and hit cleanup. That was the case again in 1936, even though Mackey was almost 40 and Gibson was in his prime. Recent research shows Mackey died in 1965, not 1959 as previously reported.