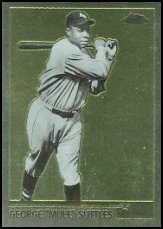 Known for his 50-ounce bat, slugger Mule Suttles is listed by John Holway as the all-time Negro League home run leader with 237, 13 more than runner-up Josh Gibson. Suttles' rate of 40/155 games is 11 behind Gibson but 8 ahead of third-place Chino Smith. Fans would shout "Kick, Mule!" when he came to the plate. He was known as a fun-loving and gentle giant.

Suttles worked in the coal mines of Louisiana before turning professional as a baseball player at age 23. He hit .283/~.316/.386 that year for the Birmingham Black Barons with only one home run in 34 games in large Rickwood Field. In 1924, Mule hit .318/~.369/.451 and was third in the Negro National League with 23 doubles, one behind co-leaders Dobie Moore and Newt Joseph. In 1925, George batted .319/~.392/.496 according to recent research - Holway had him listed at a league-leading .428 with 14 HR (third-best); he is now listed with 10 long balls. He moved from the outfield to first base that year. He would continue to shuffle between the two, but played primarily first from then out.

The slugging Stars first baseman put up a .371/~.416/.697 season in 1928 with a league-leading 11 triples (previously credited with 9) and 20 homers (previously given 19, third behind Turkey Stearnes and Frog Redus. Suttles was third in the NNL in average behind Pythian Russ and Huck Rile. On August 29, he hit three triples in a game and he homered three times on September 9. St. Louis won the NNL title but the Eastern Colored League had folded and no Negro World Series was played.

Mule played in the 1928-1929 Cuban Winter League and hit .314 with a league-leading 7 homers, including one mammoth blow that was measured at 598 feet. In the 1929 campaign, Suttles hit .344/~.394/.593 with 26 doubles, leading the NNL (previously listed at 29) and 9 HR (a far cry from the 20 in Holway's book). A teammate claims he went deep three times in an inning against the Memphis Red Sox but this is unverified and likely false. He went 7 for 20 that winter in an exhibition against white major-leaguers and homered off of George Uhle and tripled twice against Willis Hudlin.

In 1930, the 30-year-old long-ball specialist is listed by Holway as hitting 12 HR for St. Louis (second to Willie Wells) and 10 more with the Baltimore Black Sox (leading the east). Current statistics show he hit .364/~.424/.706 for those two clubs. Holway also lists him as being third in the NNL in triples (9) and first in average and also finishing 4th in the east in doubles.

Declining further in 1932, Suttles had a .266/~.321/.427 campaign which showed he was decidedly mortal. He played for the Detroit Wolves and Washington Pilots that year. Holway lists him with 12 doubles (tied for third) and 9 homers (third) but present research has him at 10 two-baggers and two round-trippers. He was just 1 for 8 in an exhibition series against Fred Frankhouse.

In '33, Mule moved to the Chicago American Giants and produced just a .283/~.347/.387 line after manager Dave Malarcher shortened his swing. In the first East-West Game, Suttles doubled, homered, scored twice and drove in 3 to lead the West to an 11-7 win. He tripled and singled twice in 4 at-bats in an exhibition against Jim Weaver. In the California Winter League, he hit .325 with a league-leading 14 homers (twice runner-up Tommy Dukes's total) and slugged .662.

Holway lists Suttles at just .254 in 1934 but present statistics show a more favorable picture of a .295/~.333/.569 line, albeit with 15 errors. That October, he hit two homers in a game against Larry French. After getting the most votes to start at first base in the 1934 East-West Game, Mule went 3 for 4 with a triple and an error as the cleanup hitter, again providing the most offense on the club, which fell 1-0 when his teammates were a combined 4 for 27. Suttles' 16 homers tied Turkey Stearnes for the lead in California Winter League play and he batted .344 and slugged .917.

1937 had Suttles hitting .360/~.461/.653 in the 22 games counted by the Hall of Fame's researches, going deep six times. Counting a higher number of games, Holway listed Suttles at .345 with a NNL-second-best 16 homers (trailing Gibson). He was 1 for 3 with 2 walks and a stolen base in the 1937 East-West Game. After a year off, he returned to the California Winter League to take his 5th home run title, breaking Stearnes' record. He homered seven times, slugged 1.00 and hit .429.

In 1938, Holway lists Suttles at .282 with a league-best 14 homers. The recent research gives him a .277/~.330/.574 season with 9 long balls. Box scores had only been located for 4 of Suttles' HR as per the printing of Holway's book; the rest were reported in the newspapers without a box. As the Hall may only have counted games with a box score (and found some new ones since), this could easily explain the discrepency in the numbers reported. Mule helped form the Million Dollar Infield for Newark, joining with Hall-of-Famers Ray Dandridge and Wells and defensive wizard Dick Seay.

At age 39, the burley baseball-basher hit .282 with 12 HR (second to Gibson) as per Holway and .341/~.383/.705 with 9 HR in just 23 games as per the accounted box scores (still likely second in the NNL to the mighty Gibson). Holway lists Suttles as being fifth in doubles (6) and tied for third in triples (2). Playing in his last East-West Game, Suttles went 0 for 4 as the East's cleanup hitter on August 6. George failed to connect in four tries against Bob Feller in the fall. In the 1939-1940 California Winter League, Mule hit .444 and slugged .611 wit hone homer in five contests.

Suttles also was an umpire in the Negro Leagues.

His career statistics are .327/~.385/.572 according to Hall of Fame research. Riley lists him at .338 lifetime. Holway has him at .341 (5th all-time behind Jud Wilson, John Beckwith, Josh Gibson and Bullet Joe Rogan) with the record 237 homers. In exhibition games against white major-leaguers (not counting the California Winter League), he hit .341 in 170 AB. His 58 hits off of white MLB pitchers is second among Negro Leaguers, behind Oscar Charleston. His 10 HR against white big-leaguers (32 per 550 AB) places him second behind Charleston as well. In five East-West Games, he batted .412 and slugged .941 with 5 runs, 6 RBI and six walks. Mule is the all-time East-West slugging leader among players with 15+ AB, leading runner-up Neal Robinson by 149 points and #3 Gibson by 319 points. In California Winter League play, he ranks second in average (.378, trailing Dobie Moore), eighth in doubles (29) and first in homers (64, 8 more than Stearnes and 36 ahead of #3 Biz Mackey). The winner of two batting crowns and six home run titles in that league, he slugged .869.

Against white major league pitchers in the California Winter League, He hit .444 and slugged .968 in 124 AB. He was 7 for 18 with 5 homers off of Larry French, 3 for 4 with a homer off of Bucky Walters and hit .348 with 4 homers in 7 games against Sloppy Thurston (a career 89-86 in the majors). Suttles would unquestionable have been a superstar in the majors had baseball been integrated then.

After retiring, George lived in Newark and he died of cancer in 1966. After many calls for his enshrinement and the recent research, Suttles was elected to the Hall of Fame by the Special Committee on the Negro Leagues in 2006.

Sources: The Complete Book of Baseball's Negro Leagues by John Holway, research compiled by many people for the Hall of Fame, Black Baseball's National Showcase by Larry Lester, The California Winter League by William McNeil and The Biographical Encyclopedia of the Negro Baseball Leagues by James Riley