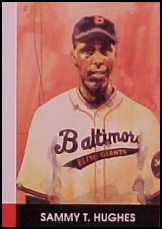 Sammy T. Hughes is one of several players presented as the top second baseman in Negro League history, along with Newt Allen, Martin Dihigo, Bill Monroe and light-hitting Bingo DeMoss.

Hughes began his career with the hometown Louisville White Sox. He hit .421 for the team in 1931, when they joined the Negro National League, but did not have enough at-bats to qualify for the league lead. In '32, he was with the Washington Pilots, then in 1933 the tall second baseman joined the Nashville Elite Giants. He remained with the Elite Giants through several franchise moves in the 30s.

In '36, Hughes went 13 for 26 in a 5-game exhibition series against a group of white players. The pitchers were Jim Winford, Mike Ryba, Bob Feller, Jim Weaver and Earl Caldwell. The white 2B that series was a retired Rogers Hornsby, who struggled, hitting just 2 for 19 as he was badly outplayed by the younger Hughes.

In 1939 Hughes led the NNL with 14 doubles. In the Cuban Winter League that year Hughes struggled, batting just .246. The next year Hughes struggled in the Negro Leagues, connecting for only a .235 clip. The 5-time player in the East-West Game was wearing down after less than a decade of success. No other player had made more East-West appearances, though.

In '41, Hughes was rejuvenated by his only season in the Mexican League. He hit .324/.388/.453 for the Torreon Cotton Dealers but the 30-year old failed to finish among the leaders in anything in the high-offense Liga.

The next season Hughes hit .309, best on an Elite Giants team that finished second on the NNL - he posted a better average than Roy Campanella or Wild Bill Wright. He again led the NNL in doubles, with 11. Along with Campanella, he was suspended in September for playing an exhibition game without the permission of Baltimore owner Tom Wilson. Campy went to Mexico for two years following this incident.

Hughes then was called up to military duty and spent the next three years in the armed forces.

He played one more year after the War then retired to work for Pillsbury.

Hughes dazzled in 7 years in the California Winter League during his career, hitting .384, 33 points better than Babe Herman and higher than Hall-of-Famers Oscar Charleston, Turkey Stearnes and Cool Papa Bell. He also was among the top 10 in homers in the CWL, with 17 in 294 AB.

Never a league leader in anything other than doubles, Hughes was known as a good contact hitter and great defensive 2B with some speed and some power.