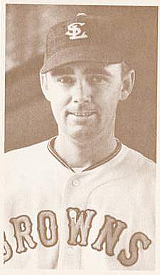 Earl Caldwell pitched professionally for at least 29 seasons (1926 to 1954), winning at least 302 games in the minor leagues while enjoying three separate stints in the big leagues, each taking place in a different decade.

Originally debuting in the Class D Texas Association in 1926, Earl made it to the bigs within two years, getting the call from the Philadelphia Phillies in 1928. He made five starts, with his debut a doozy. Facing the Boston Braves in the second game of a doubleheader on September 8th at the bandbox Baker Bowl, he held a Braves lineup including George Sisler and Rogers Hornsby to 6 hits en route to a 4-0 shutout. Offenses caught up to him in his ensuing four starts, as he finished the season with a 1-4 record and 5.71 ERA in 34 2/3 innings. His ERA was actually about in line with the Phillies' team ERA of 5.56 typical for a bad team in the lively ball era of play, .

Back to the minors Earl went. Between his Phillies debut and his next big league stint, he habitually racked up 200 innings each year and was twice a 20-game winner, with both instances coming in the Texas League. In 1929, he was 21-15 in 291 innings for the Waco Cubs. In 1934, he finished 20-14 with a 3.58 ERA in 294 innings for the San Antonio Missions. He was en route to another 20-win season with the Missions in 1935, at 19-15 with a sparkling 2.27 ERA, when the St. Louis Browns brought him back to the big leagues in September. He was a winner in his first game back, allowing an unearned run to the Philadelphia Athletics on September 9th while going the distance at Shibe Park. He also tossed his second shutout, blanking the vaunted Detroit Tigers lineup featuring Mickey Cochrane, Charlie Gehringer, Hank Greenberg and Goose Goslin, in a 1-0 victory at Navin Field on September 23rd.

The next season, 1936, Earl was rewarded with his first full-time campaign as a big leaguer. It was horrifying. He was able to hurl 189 innings in 41 games (25 starts), racking up 10 complete games with 2 shutouts, but he finished with a tough 7-16, 6.00 record, leading the American League with 15 hit batsmen. He started 1937 in the bigs, but a 6.83 ERA in 9 games led to his minor league return. Earl spent a few tough-luck seasons with the Toronto Maple Leafs of the International League, then made his way back to the scene of his greatest successes, the Texas League. Settling into a steady gig with the Fort Worth Cats in 1941, Earl was a bananas 22-7 with a microscopic 1.57 ERA and 1.02 WHIP in a league-leading 281 innings, following that with an impressive 21-13 mark and 2.33 ERA in another league-leading total of 305 innings at the age of 37 in 1942. Perhaps due to his age, there were no nibbles from big league clubs.

He was not done pitching yet. Earl hung around until 1954, rattling off three consecutive seasons in which he led his league in ERA during his age 46-48 seasons. In 1951, as player-coach with the Harlingen Capitals of the Class B Gulf Coast League, he finished 19-6 with the league best 2.22 ERA in 199 innings. Returning to Harlingen in 1952, he enjoyed his final 20-win season, going 20-11 with the league's top ERA of 2.73 in 204 innings. In 1953, as player-coach of the Lafayette Bulls of the Class C Evangeline League, he dealt to a tough luck 11-10 record despite a league-leading 2.08 ERA. Even more remarkably, his catcher that season was his son, Earl Jr.. He split his final season with time as player-coach back at Harlingen and some time with the Corpus Christi Clippers, both squads now part of the Class B Big State League.

According to Baseball Nicknames, Earl was nicknamed "Teach" due to his being a history teacher in his hometown. He died of liver cancer at age 76.