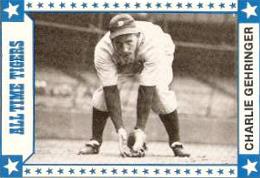 "Charlie Gehringer is in a rut. He hits .350 on Opening Day and stays there all season." - Lefty Gomez, joking about Gehringer's hitting prowess

Charlie Gehringer, who played all his nineteen years in the majors with the Detroit Tigers, was American League MVP in 1937 and second in the MVP voting in 1934. He ranks (as of 2007) 19th all time in both runs scored and doubles.

A many-talented player, Gehringer led the league in stolen bases, doubles, triples, runs scored and hits in 1929, but did not figure in MVP voting that year.

Gehringer, who was called "The Mechanical Man" because of his consistent approach to the game, played before there were Gold Glove awards, but was a good defensive player for much of his career. He was also named as one of Detroit's "G-Men", along with Goose Goslin (who was with the team during Gehringer's great 1934 and 1937 years) and Hank Greenberg (who became a regular with the Tigers in 1933).

Gehringer came up originally at age 21 in 1924. Born in Michigan, he was at the University of Michigan in 1923 and played in the Michigan-Ontario League before coming up with Michigan's major league team, the Tigers. He played most of 1925 at Toronto.

He became a regular in 1926, at a time when Ty Cobb was player-manager and Harry Heilmann and Heinie Manush were in the outfield. Manush won the batting championship that year, hitting 101 points higher than Gehringer. Later, Gehringer would give Cobb credit for teaching him how to swing.

After his baseball career he joined the Navy in 1942 and stayed for four years. Thereafter he ran a successful auto accessories business.

He was also general manager for the Tigers for a couple years and vice president of the Tigers after that. Before he died in 1993 he was the oldest living member of the Hall of Fame.

"I've never seen one man hit in so much hard luck, consistently. Year after year, he leads the league in line drives right at somebody. No wonder he looks so sad." - Bucky Harris.