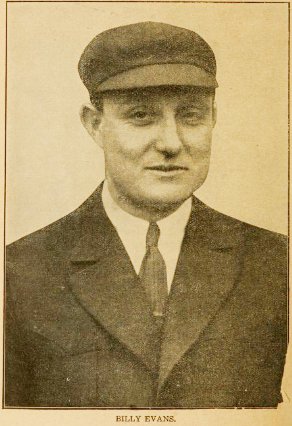 Billy Evans was an American League umpire from 1906 to 1927. He later became a key front office person for three teams and president of the minor league Southern Association. In addition to his inside role in the sport, Evans authored countless articles, as well as a book, Umpiring from the Inside. He was elected to the Baseball Hall of Fame in 1973, the third umpire ever selected.

Evans was born in Chicago, IL, but relocated with his family to Youngstown, OH, after Evans' father accepted a management position in a Carnegie steel plant. Evans proved to be a standout athlete at Rayen High School and went on to play football and baseball at Cornell University. After two years, his law studies and college sports career came to a halt, however, with the sudden death of his father.

Evans returned to Ohio and accepted a job as a sports reporter at the Youngstown Daily Vindicator. In 1904, while covering a baseball game between the local club and a team from Hermitage, PA, Evans was approached by the manager of the Youngstown ball club, ex-major leaguer Marty Hogan, and asked to fill an umpire vacancy. His performance earned him a spot as a full-time league umpire. The following year, Evans received a spectacular career boost from another Youngstowner, ex-ballplayer Jimmy McAleer, who was so impressed with the young man's ability that he recommended Evans to American League president Ban Johnson.

At 22 years of age, Evans was the youngest umpire in major league history; furthermore, he was among those very rare umpires who broke into the major leagues with no prior professional experience. He was an umpire for six World Series: 1909, 1912, 1915, 1917, 1919 and 1923. Working in an era during which most major league games used no more than two umpires (and sometimes only one), Evans single-handedly umpired seven doubleheaders in eight days during the 1907 season. He was the base umpire for Charlie Robertson's perfect game on April 30, 1922. He wrote a regular newspaper column while working as an umpire. Evans noted that he was the umpire for an unusual number of important games pitched by Walter Johnson, including his major league debut. Later, as a GM, Evans would hire Johnson to manage the Indians. 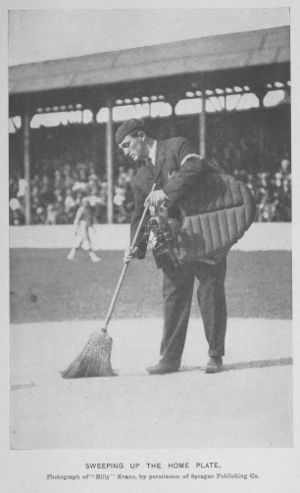 Evans sweeping up home plate. About 1913

Evans retired from umpiring following the 1927 season to become the general manager of the Cleveland Indians. For the next eight years, he served in that role until budget cuts forced him out in 1935. Though he was not the first person to hold a GM's responsibilities, he was the first person to be called "General Manager". He soon found work as chief scout and head of the Boston Red Sox's farm system, but left on October 8, 1940 after the team sold future Hall of Famer Pee Wee Reese to the Brooklyn Dodgers over his objections.

Shifting sports, Evans returned to Cleveland, OH to become general manager of the pro football Cleveland Rams for the 1941 season. Although the team struggled on the field, it was a financial success, but after failing to come to terms on a new contract, Evans left and spent the next year writing before accepting the position of league president of the Southern Association on December 3, 1942.

During his four years leading the league, the Association thrived despite many other leagues shutting down due to World War II. In his first year, attendance increased by nearly 300,000, and while it dipped slightly in 1944, the threshold of one million people attending league games was again reached the following year.

On December 16, 1946, Evans accepted a contract offer from the Detroit Tigers to become their general manager. One of his first moves was dramatic - selling aging superstar Hank Greenberg to the Pittsburgh Pirates. Over the next four years, the team had two runner-up finishes to the New York Yankees, but after dropping in the standings during the 1951 season, Evans announced his resignation on July 28th in favor of Tiger legend Charlie Gehringer.

Nearly a year later, Evans had unofficially retired, then was injured in an automobile accident in Monroe, MI. After recovering, he remained in good health until January 21, 1956, when he suffered a massive stroke while visiting his son in Miami, FL. Evans died two days later at the age of 71.

Quote: "I though I was a pretty good fighter, but I believe [Ty] Cobb could have been a champion in the ring as well as on the playing field." Billy Evans.