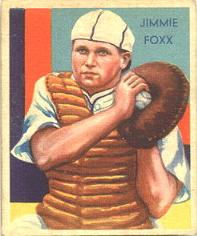 Inducted into Hall of Fame in 1951

"He was the only hitter I ever saw who could hit balls on his fist and still get them out of the park. He had muscles on his muscles." - Lefty Gomez

"You just can't imagine how far he could hit a baseball." - Ted Williams

Jimmie Foxx, often called "Beast" or "Double-X", is generally considered the best first baseman of all time other than Lou Gehrig. His major league career stretched 20 seasons, mostly with the Philadelphia Athletics and the Boston Red Sox. A prodigious home run hitter, he had 534 home runs lifetime, finishing his career behind only Babe Ruth (many others have passed him since). He had 1,922 RBI, placing him # 8 on the all-time list as of 2006. His .609 slugging percentage puts him at # 5 on the all-time list (and if active player Albert Pujols drops a bit before his career is over, Foxx will move back up to # 4). 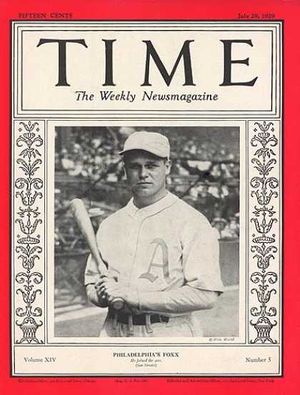 Foxx broke in as a catcher and played 108 games in his career at that position. He also played some third base from time to time, with 141 games at the position. In addition, he pitched 10 games, mostly at the age of 37 in 1945, with an excellent ERA of 1.59 in 22 2/3 innings. In 1945, his last year in the majors, he had the lowest ERA on the staff for the Philadelphia Phillies. It was the last year of World War II and rosters were thin. When Foxx was a pitcher, he hit 9th on nine occasions. Until 2011, he was the only player to be slotted into the #9 slot with 400+ career home runs - Andruw Jones became the second to do so. He is sometimes remembered as a slugger who couldn't do much else, but that is not correct: he was an outstanding all-around athlete who could sprint with the best, had an excellent throwing arm and also hit for average. The reason he was moved off the catcher's position is that the Athletics soon acquired Hall of Famer Mickey Cochrane to play there, and Foxx moved around because he was always willing to take up a different position if that could help his team.

His best year was probably 1932 when he hit 58 home runs and also hit two more over the fence at Shibe Park that were not counted as home runs. There is also a legend that he lost anywhere from 3 to 12 home runs at Sportsman's Park, home of the St. Louis Browns, because of a "temporary" screen in right field, erected in 1929, which elevated the height of the fence there from 11.5 to 33 feet; after studying game records from that season, researcher Robert H. Schaefer concluded that this was bunk, as the screen at most cost Foxx one long ball, and in any case, it was a permanent feature of the ballpark, having stood from 1929 until the park was finally abandoned in 1966, except for one year. Foxx slugged .749 that year. In 1933-1934, he led the American League in home runs in five consecutive months. It would be 67 years before Jose Bautista became the next major leaguer to accomplish that.

He was a veteran with the Boston Red Sox when rookie Ted Williams came up in 1939, and had an impact on the young Williams. Based on the similarity scores method, the two most similar players to Foxx are Lou Gehrig and Williams.

He was teammates with Hall of Famer Lefty Grove for much of his career, as Grove played with him on both the Philadelphia Athletics and Boston Red Sox. He was also a teammate of Hall of Famer Mickey Cochrane for his first 9 years with the Athletics, and of Al Simmons for 8 years.

Supposedly, he built up his strength as a youngster doing chores on his father's farm. He had huge arm muscles for the time. Home Run Baker noticed him while in high school, and invited him for a minor league tryout. Baker then recommended him to Connie Mack of the Athletics. His major league debut was at age 17, when he had 6 hits in 9 at-bats. He mostly sat on the bench his first couple of seasons, as Mack watched over the teenager.

He was only 32 years old when he hit his 500th homer and seemed likely to challenge Babe Ruth's lifetime total, but he declined quickly. Some observers trace his decline to a beaning he suffered while playing on a barnstorming tour in Winnipeg, MB after the 1934 season. He had enjoyed perfect health before that, but would later complain of various ills, such as acute sinus pain and blurred vision after the beaning. He was not one to complain about health issues, but doctors were unable to help him much, and he developed a drinking problem in the 1940s, in part because of his failing health. He also made some poor investments in a golf course in Florida that went bankrupt, swallowing much of his life savings just as his playing career and earning potential was winding down.

After his playing days, he managed and coached in the minors, was a college baseball manager, and was a sports announcer in 1946. His managerial stops in the minors were with the 1944 Portsmouth Cubs, 1947 St. Petersburg Saints and 1949 Bridgeport Bees.

He also managed the Fort Wayne Daisies briefly in 1952, and that experience was dramatized in the movie "A League of Their Own". He was head baseball coach at the University of Miami in 1956-1957.

He ranked second all time in home runs at the time of his retirement. Foxx was originally believed to have died of a heart attack (he had a history of heart trouble), but an autopsy showed the cause of his death as asphyxiation (He choked on a piece of meat).