Al Simmons is one of the least-remembered great stars from the lively ball era. He hit for a high average with power, and also had good range in the outfield, playing left field and center field. He had some of his best years from 1929 to 1931, leading the Philadelphia Athletics to three pennants and two World Series championships in that three-year period.

Simmons, born Alois Szymanski, was born and died in Milwaukee, WI. He broke into the majors with the 1924 Philadelphia Athletics at the age of 22, driving in 102 runs that year, good for second on the team and ninth in the league. He attracted some attention from around the league, as he was 11th in the MVP voting as a rookie. 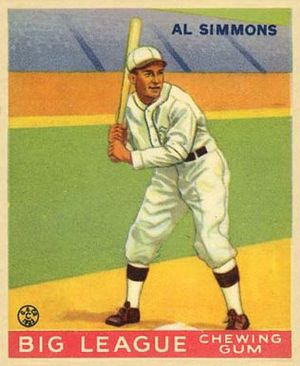 Simmons then kicked up his performance notably in his second major league season, finishing second in the MVP voting. He led the league in both hits and total bases that year. By 1927, Simmons was a young star who played with quite a few old veterans on the Athletics: Ty Cobb, Eddie Collins, and Zack Wheat. The team also had a number of other young stars, including Jimmie Foxx (then 19) and Lefty Grove. Simmons posted an Adjusted OPS of at least 140 for seven straight seasons, from 1925 to 1931, reaching a peak of 176 in both of the pennant-winning seasons of 1930 and 1931. He was the American League batting champ in both years. He held the American League record of 394 consecutive games to start his career (1924-1926), until broken by Hideki Matsui, who played 518 consecutive games for the New York Yankees from 2003 to 2006. He set an MLB record by reaching 100 RBIs in his first eleven MLB seasons (1924-34). Simmons reached 1,500 hits in 1,040 games, the quickest player to 1,500 hits in MLB history. He was also the quickest player to reach 2,000 hits in MLB modern history, he did so in 1390 games.

Simmons then had a long decline phase, from 1932 to 1944, when his Adjusted OPS was never as high as 140, making nine different stops in those years and never playing for one team longer than three years in that period.

He was called "Bucketfoot Al", because his natural swing put his foot "in the bucket", which is to say towards third base, which is normally considered a flaw.

He died relatively young, shortly after he turned 54.

"Never relax on any time at bat. Never miss a game you can play." - Al Simmons to Stan Musial