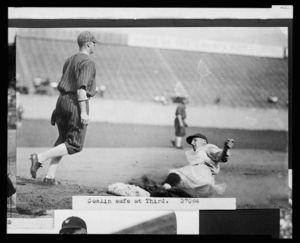 Goose Goslin was a multi-talented player whose closest comparison is Roberto Clemente, according to the similarity scores method. Goslin didn't often lead the league in major categories (although he won the batting title in 1928), and he was never the MVP, but he was frequently among the league leaders, as his Gray Ink score of 200 shows. He appeared in five World Series, winning with the 1924 Washington Senators and the 1935 Detroit Tigers. Goslin didn't age particularly well, posting his best years between the ages of 23 and 30.

Goslin grew up in New Jersey and was spotted by umpire Bill McGowan, a fellow New Jerseyan, while playing for a DuPont factory team. Goslin was a farm boy, however, and had developed unusual strength by doing farm chores. On McGowan's recommandation, Goslin was signed by Zinn Beck to pitch for Columbia in the Class-C South Atlantic League in 1920. In 1921, he switched to the outfield and put up a .390 batting average, the best in the league. That got him competing offers from Jack Dunn, the owner of the International League's Baltimore Orioles, and Clark Griffith, owner of the Washington Senators. The latter rushed to South Carolina and got to Goslin first. He would become the best position player in the history of the team after making his debut at the tail end of the 1921 season. He is also the only player in franchise history to play every single inning of the team's three World Series appearances.

Numerous sources explain that he got his nickname shortly after arriving in Washington because he waved his arms as he went after fly balls, had a long neck, and generally was not the most graceful player. He also had a highly unusual very closed batting stance. His left eye was almost facing the catcher as his swing started, and he unfurled himself in a vicious 180 degree turn, standing on his heels, thus generating great power as a pull hitter. He found success very quickly in the major leagues, batting .324 in 1922. In 1923, he hit 18 triples, tying him with teammate Sam Rice for the American League lead. In 1924, he was one of the main reasons the Senators won their first-ever pennant, as he hit .344 in 154 games and led the league with 129 RBI. The Nats beat the New York Giants in a closely-fought seven-game World Series to claim the only championship in their history that year. He hit .344 with 11 hits, 3 homers and 7 RBI as one of the team's offensive leaders. The Senators repeated in 1925, when he hit .334 with a league-leading 20 triples, while scoring 116 runs and collecting 113 RBI, but they were beaten by the Pittsburgh Pirates in another dramatic seven-game World Series, with Goslin hitting .308 with another 3 long balls.

In 1926, Goslin was a victim of his home park, as he hit 17 home runs, but not one of them at Griffith Stadium. He hit .354 that year, then .334 in 1927, with 120 RBI. He was a holdout in spring training of 1928, but went on to have one of his best years, winning the American League batting title by one percentage point over the St. Louis Browns' Heinie Manush, .379 to .378. The race went down to the final at-bat of the season, with Goslin having not to make an out to be the winner. As he details in The Glory of Their Times, he was very nervous stepping up to the plate, and after taking two strikes, tried to get himself ejected by umpire Bill Guthrie, who would have none of it. Guthrie, who usually had a short fuse, told him he wouldn't throw him out or call a walk, either, so Goslin would have to get the business done himself. He stroked what he describes as a lucky hit to secure the title. That spring, Goslin injured his throwing arm while fooling around with a high school track team in Florida. He tried to throw the shot put like a baseball, and his arm felt sore the next morning. The pain stayed, and he never regained the strength in his arm after that. Opposite baserunners knew that he couldn't throw, but he was such a good hitter that he was never in danger of losing his place in the outfield.

In 1929, Goslin slumped to a .288 batting average, and the next season, in 1930, he was traded to the St. Louis Browns on June 13 in return for Manush and pitcher Alvin "General" Crowder. He hit .326 for the Browns the rest of the way, and between the two clubs slugged a career-high 37 homers. In 1931, his 31 homers placed him fifth in the American League. In 1932, he had another productive year, with 104 RBI, although with a .299 average, he failed to hit .300 in a full season for only the second time. He made headlines that year when he tried to use a zebra-striped bat in a game, as a means of distracting the pitcher. The umpires disallowed the piece of lumber. After the season, Goslin was traded back to the Senators, in time for the team's last pennant in 1933. He hit .297 and scored 97 runs, but went only 5 for 20 in the World Series against the Giants. He did not get along with player-manager Joe Cronin however, who did not like his love of clowning around and after the season, he was traded to the Detroit Tigers. Although no longer a dominant player, he would reach the World Series twice more with the Tigers, in 1934, when they lost in seven games to the "Gas House Gang" St. Louis Cardinals, and in 1935, when they beat the Chicago Cubs. Goslin got the Series-winning hit in the 9th inning of Game 6, lining a pitch from Larry French into right field to score Mickey Cochrane from second base for a 4-3 win and Detroit's first-ever Championship. 1936 was Goslin's last very good season, as he hit .315 with 24 home runs and was named to the All-Star team for the only time of his career; it must be remembered that the first All-Star Game was only played in 1933, when Goslin began his decline as a player. In 1937, he slipped to .238 and was released by the Tigers the following spring. He signed on for a third tour of duty with the Senators on April 3, 1938, but there was little left in the tank. He was batting .158 in very limited action when he wrenched his back while facing Lefty Grove on September 25 and had to be removed for a pinch-hitter - the only time this ever happened in his entire career, putting an inglorious end to a great career.

Goose Goslin is the all-time leader in games played by a New Jersey native. He finished his career with a .316 batting average, and 2735 hits, including 500 doubles, 173 triples and 248 home runs. He then was player-manager for Trenton of the Interstate League from 1939 to 1941, but quit in August that last year when his team lost 15 of 18 games. In later life he ran a farm and a boat rental service in Southern New Jersey for many years. He spent a lot of time fishing in Delaware Bay after his wife died in 1960.

Goslin was a victim of the glut of players waiting to get into the Hall of Fame in the 1940s and early 1950s and did not receive serious consideration until he was featured in Lawrence Ritter's seminal book, The Glory of Their Times. Like a number of the players in the book, Goslin's name resurfaced in the public mind as a result of the interviews he gave to Ritter. In 1965, his long-time rival Heinie Manush was selected, then in 1968, it was Goslin's turn, courtesy of the Veterans Committee. He was inducted on July 22, 1968 and expressed tremendous appreciation for the honor in his acceptance speech. He died in 1971 in Bridgeton, NJ, ironically three days after Manush, and was buried in his hometown of Salem, NJ.