Inducted into Hall of Fame in 1956 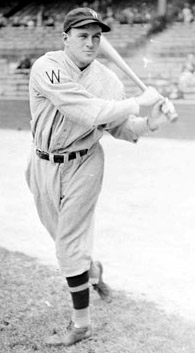 Hall of Famer Joe Cronin was an All-Star shortstop, a pennant-winning manager, a long-time general manager, and president of the American League.

Cronin grew up in San Francisco and was a gifted all-around athlete, winning a city junior tennis championship at age 14. After graduating from high school, he played semipro baseball while working as a bank clerk. He was discovered by a scout, who signed him to play in the Pittsburgh Pirates organization in 1925. He reached the majors as a 19-year-old in 1926 but saw limited playing time in parts of two seasons with Pittsburgh.

Cronin's contract was purchased by the Kansas City Blues of the American Association prior to the 1928 season, and they in turn sold it to the Washington Senators for $7,500 later that year. He became the Senators' regular shortstop in 1929 and the next year, 1930, hit .346 with 13 home runs and 126 RBI en route to winning the Writers' MVP Award (forerunner of BBWAA Award) and The Sporting News MVP Award.

At age 26, Cronin became player/manager of the Senators in 1933. In his first year at the helm, he led the club to an American League pennant, losing in the World Series to the New York Giants. He also hit .309 that year, finished second in MVP voting, and was the starting shortstop in the inaugural All-Star Game. He returned to the All-Star Game again the following year.

After the 1934 season, the Senators sold player/manager Cronin to the Boston Red Sox for $225,000 (one of the first significant acquisitions by new Boston owner Tom Yawkey), as they needed the money during the Depression. With the Red Sox, he was selected to the All-Star team five more times, and as skipper, he led the team when a young Ted Williams was brought up from the minors. By 1942, he was primarily a pinch hitter for the team, and the following season, he set an AL record with 5 pinch home runs.

Cronin (in the suit) and Yankees manager Ralph Houk in 1969

Cronin retired as a player early in the 1945 campaign, ending his career with a .301 batting average. He remained on as the Red Sox manager though, leading the club to a pennant in 1946. After the 1947 season, he moved into the Boston front office as General Manager, a post he held through 1958. To this day, he remains the winningest manager in Red Sox history, with 1,071 wins, and his uniform number, #4, was retired by the team.

Cronin was married to the niece of Clark Griffith, and thus was related by marriage to Calvin Griffith and Senators pitcher Joe Haynes.