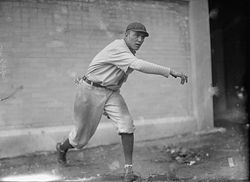 Joe Engel had a career ERA of 3.34, compared to a league average of 2.98 while he pitched. In 1913, he finished third in most allowed hits per game and most batters hit. He pitched on the same team as Walter Johnson for several years. But he found his calling as a scout, wrangling such legends as Joe Cronin, Bucky Harris, Ossie Bluege, Buddy Myer, Doc Prothro, and Goose Goslin for the Washington Senators and owner Clark Griffith.

When Engel first spotted Cronin playing in Kansas City, "I knew I was watching a great player. I bought Cronin at a time he was hitting .221. When I told Clark Griffith what I had done, he screamed, "You paid $7,500 for that bum? Well, you didn't buy him for me. You bought him for yourself. He's not my ballplayer - he's yours. You keep him and don't either you or Cronin show up at the ballpark." Cronin became the best player on the World Series-winning 1933 Senators and even married Griffith's daughter.

Engel then became the president of the Double-A Chattanooga Lookouts club in 1930, housed in a stadium bearing his name - Engel Stadium. He held legendary promotions: raffling a house in 1936 to a crowd of 26,000 people in a stadium that seated 12,000; hosting a mock elephant hunt on the field before a game; featured ostrich races; making broadcasters call games while sitting on the back of a camel; and bringing the New York Yankees to town so Babe Ruth and Lou Gehrig could face Jackie Mitchell, a 17-year-old girl with a superb side-arm sinker pitch, April 2, 1931.

He was a difficult president, demanding the most of his players. Anyone who didn't hit over .300 was sent packing. Engel traded shortstop Johnny Jones for a 25-pound turkey. He was equally hard on umpires, but playful, too.

In his tenure, the Lookouts won four championships -- three in the Southern Association and a fourth in the South Atlantic League. For a time, Engel led the charge to own the Lookouts privately with the help of several hundred fans as shareholders from 1938 to 1942. In 1939, as a privately-owned franchise under coach Kiki Cuyler, the Lookouts claimed a championship.

Outside of baseball, Engel entered his horse Hallieboy into the Kentucky Derby in 1950. The horse was dubbed as a laughing stock, underdog ... and finished 10th of the 14 horses in the race.

Engel is a legend among baseball owners, a promotional mastermind comparable to Bill Veeck. Though often unheralded, he is not forgotten in Chattanooga.