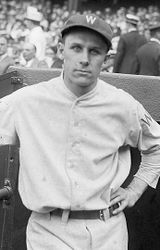 “He had that smoothness that stood out. He never seemed to strain at the position. There was nothing dramatic. I think Bluege was so quick, you never saw the rough edges. He was a natural.” - Commissioner Bowie Kuhn

Ossie Bluege was an excellent defensive third baseman for 18 seasons in the majors, all with the Washington Senators. He is credited with the theory of "cutting down the cone", i.e. playing closer to home plate in order to reduce the angle at which the batter can aim to hit a ground ball past the third baseman. He was also the first third baseman to guard the lines in the late innings, in order to prevent extra-base hits.

Bluege came up with the Senators at the age of 21 in 1922, and from 1923 to 1933 held down the hot corner in D.C. He began roaming the diamond in 1934, seeing more time at the other infield positions and making the All-Star team in 1935. He played on the Washington Senators' World Series-winning team in 1924, batting sixth in the order behind Sam Rice, Goose Goslin, and Joe Judge. He also played on the Senators pennant winners in 1925 and 1933, losing in the World Series. In 17 Fall Classic games, he was 12-for-60 (.200) with two doubles and five RBI. Ossie's bat was always modest; at a time when many people hit .300, Ossie never did. His highest batting average was .297 in 1928, when he also had his best slugging year with a percentage of .400.

During the offseasons, since he never earned a whole lot as a ballplayer, he worked as an accountant (and thus earned the nickname "The Accountant" from his teammates). Although Clark Griffith ordered him (in vain) to stop out of concern that he would strain his eyes, the accounting experience paid off in later life, as Bluege eventually became Comptroller for the Senators, sticking around as they moved to Minnesota until retiring in 1971. After his playing career officially ended, he also spent two seasons as a Washington Senators coach in 1941 and 1942, and five as their manager, from 1943 to 1947. He also spent time as the Senators' farm director, discovering future Hall of Famer Harmon Killebrew.

His brother, Otto, played briefly for the Cincinnati Reds. Ossie died of a stroke in October 1985.