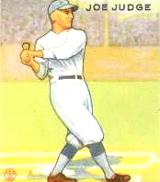 Joe Judge had a 20-year career in the major leagues as a first baseman. He broke in the year after Babe Ruth did, and finished up the year before the Babe finished.

He was a quick little fellow, playing at a time when first basemen needed to be fast on their feet, and when he retired, he held a host of fielding records at first base. The Washington Senators infield of 1924, of which he was a part, was famous for its sterling defense.

In the 1924 World Series, he hit .385, batting fifth in the lineup behind Sam Rice and Goose Goslin. In the 1925 World Series, he batted cleanup in several of the games as Rice had been moved to the lead-off spot.

Judge finished his career playing two seasons with the Brooklyn Dodgers and Boston Red Sox. On the Dodgers, 36-year-old Lefty O'Doul was a teammate, as was Hack Wilson. On the Red Sox in 1934, 40-year-old Joe Judge and 40-year-old Herb Pennock closed out their careers in the same season.

The similarity scores method shows a variety of old-time players as similar to Judge, along with two more recent players who seem very similar to him: Keith Hernandez and Mark Grace.

After his playing career ended, Joe Judge was a Washington Senators coach in 1945 and 1946. From 1937 to 1958, except for the two years coaching at the major league level, he was the coach at Georgetown University. In 1990, he was inducted into the Hall of Stars, a Hall of Fame for athletes from the Washington, D.C. area.

Babe Ruth, in his book Babe Ruth's Own Book of Baseball, praised Judge for getting clutch hits.

Joe's grandson Mark Judge wrote a book about the Senators called Damn Senators: My Grandfather and the Story of Washington's Only World Series Championship.

When Joe was young, a postman had given Joe his first first baseman's glove. Joe never forgot, and continually left tickets for the postman when the Senators came to New York. He also chatted with the postman before games, and although fined for doing so, nevertheless eventually continued to do it.