Note: This page is for Hall of Famer Hack Wilson; for the minor league player with the same name, click here. 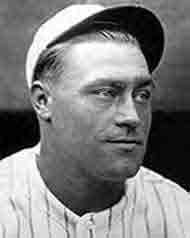 Inducted into Hall of Fame in 1979

Hack Wilson had a relatively short career for a Hall of Famer but led the league four times in home runs. Most notably, he hit 56 homers in 1930, a National League record that stood for almost seven decades, until eclipsed in 1998 by Mark McGwire, who was later revealed to have been using PEDs. Wilson continues to hold the all-time single-season RBI record with 191, however.

Although remembered primarily for his days with the Chicago Cubs, Wilson broke in originally with John McGraw's New York Giants and in 1924 was a regular on the Giants team that went to the World Series.

Late in his career he was the RBI leader for the Brooklyn Dodgers in 1932, driving in Lefty O'Doul, who was the runs scored leader.

He first played in the minor leagues for the Martinsburg Mountaineers and Martinsburg Blue Sox of the Blue Ridge League in 1921 and 1922, and the Portsmouth Truckers of the Virginia League in 1923 before coming to the majors in 1923. His lowest batting average during those three years was .356, in his first season. When he came to the majors, there was no uniform to fit the short, stocky Wilson, so he wore McGraw's uniform (McGraw was 5' 7"). He played for the Toledo Mud Hens for part of 1925. He didn't get along with the Cubs' manager, Rogers Hornsby, in 1931. After the majors he played for the Albany Senators in 1935. After baseball he worked in a war plant and then became a municipal parks employee in Baltimore, MD. He died there at age 48.