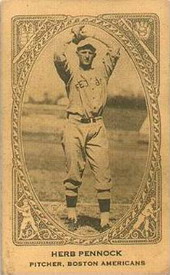 Inducted into Hall of Fame in 1948

Herb Pennock pitched 22 seasons in the majors with a record of 241-162. He was often where the action was - he was on the Philadelphia Athletics at the time of the $100,000 infield, was on the Boston Red Sox when Babe Ruth was a pitcher there, and was with the New York Yankees for over a decade, including being part of the 1927 Yankees, considered by many to have been the best team in baseball history.

Born in Pennsylvania, Pennock was up with the Athletics at age 18 in 1912. In his second season with the team, they won the World Series, although Pennock did not appear. In his third season, 1914, he went 11-4 and appeared briefly in Game 4 of the 1914 World Series.

Herb split his time in 1915 and 1916 between the majors and the minors, spending time in Providence and Buffalo. Connie Mack was dismantling his great team and Pennock was selected off waivers in the summer of 1915 by the Boston Red Sox, where he became a teammate of Babe Ruth. The Sox went to the World Series in both 1915 and 1916 but Pennock did not appear. He missed the 1918 season, during which the Red Sox won their last World Series of the 20th century, because of military service in World War I. Herb won 16 games in both 1919 and 1920, but it was after an off-season in 1922, when he went 10-17, that he was traded to the New York Yankees.

At age 40, he closed out his major league career pitching for the 1934 Red Sox. His ERA of 3.05 was the best on the staff of any pitcher who had at least five appearances (Herb appeared in 30 games). He is one of three players to win a game in his teens and in his forties (along with Bert Blyleven and Mike Morgan).

After his playing career ended, he was a Boston Red Sox coach from 1936 to 1939. In 1948 he was elected to the . His premature death in January of 1948 focussed a lot of attention on his career, and shortly thereafter he was elected to both the International League Hall of Fame and the Hall of Fame, the first of a number of players to get a boost in votes to Cooperstown after passing away.

"Yep, wildness was my problem. At least it was until Herb Pennock, another pitcher on our Yankee staff, straightened me out." - George Pipgras