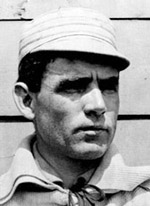 "He was the greatest humanitarian who ever lived and the greastest pillar of honesty baseball ever had. I never played for a better man, on the field or off." - Bobo Newsom

After a successful career as a pitcher and manager, Hall of Famer Clark Griffith was the longtime owner of the Washington Senators. Born in a log cabin in Missouri, Griffith began his big league career with the 1891 St. Louis Browns. He joined the Chicago Colts in 1893 and won at least 20 games for them for six straight seasons, from 1894 to 1899. He jumped to the Chicago White Sox of the new American League in 1901 and posted a 24-7 record while managing the club to the pennant. He moved on to the New York Highlanders in 1903 and later also played for and managed the Cincinnati Reds.

He umpired a total of five major league games, starting in the American Association in 1891 and ending in the AL in 1903.

Griffith joined the Senators as skipper in 1912 and purchased ten percent ownership in the club. In December 1919, he bought controlling interest in the team and stepped down as manager the following season. Although the club won three AL pennants and the 1924 World Series, they struggled in the second division for most of his tenure at the helm. They had a hard time competing financially with the other teams, and Griffith often had to sell off his star players.

Pres. Truman receives baseball tickets and a handbag for his wife from Griffith.

In 1923, Griffith adopted two of his sister's children. After the death of the children's father, he also took in their five siblings. One of the adopted Robertson children, Sherrard, played parts of ten seasons for the Senators, and two of his adopted daughters married ballplayers (Mildred married Joe Cronin and Thelma married Joe Haynes). The eldest two children, Calvin and Thelma, were given 25.5% of the club upon Clark's death in 1955, and Calvin ran the team for many years.

In 1912, Griffith became the first man in baseball history to face one and only one batter in a season, and give up a home run to that batter. The feat was later matched by Milwaukee's Dave Koslo in 1955.