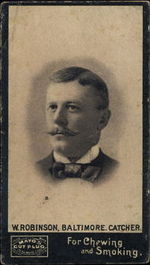 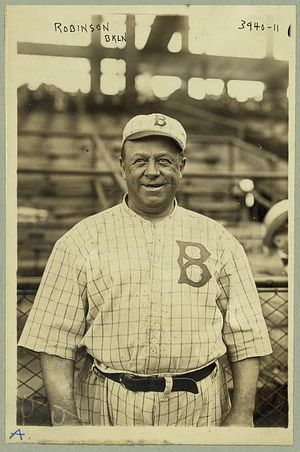 Robinson as manager of the Brooklyn Robins, in 1916

"Robinson's world's record was made against St. Louis on June 10, 1892 . . . the pitching victims were Getzein, Young and Breitenstein. In seven times at bat, Robinson made six singles and a double, driving home 11 runs and scoring one himself." - Sporting Life of August 21, 1915, which also published the box score of that game, about Wilbert Robinson the player

"There's only one theory on pitching. Get the biggest guy you can find who can throw a ball through a two-inch plank and you got yourself a pitcher." - Wilbert Robinson the manager

As a player, Robinson was part of the famous National League Baltimore Orioles of the 1890s, along with John McGraw, Hughie Jennings, and a number of other famous players. He first managed in 1902, in his last season as a major league player, and then didn't manage in the majors again until 1914 - he was John McGraw's pitching coach with the New York Giants from 1903 to 1913, until a bitter parting of the ways when McGraw criticized Robinson for the team's pitching in the 1913 World Series. Robinson had never played for the Brooklyn team, but managed them beginning in 1914 for 18 years.

In addition to his playing record, Robinson umpired one National League game in 1898.

Robinson was General Manager of the Atlanta Crackers in 1933 and replaced Charley Moore as manager on August 12th.