Inducted into Hall of Fame in 2013

Most famous as an umpire, Hank O'Day also pitched and managed in the majors. He was elected to the Hall of Fame in 2012.

A Chicago, IL native, O'Day began his pro career in the Northwestern League in 1883. He reached the majors with the Toledo Blue Stockings of the American Association in 1884, going 9-28 in 41 games. He split the next season with the AA's Pittsburgh Alleghenys, for whom he was 5-7 with a 3.67 ERA in 12 appearances, and the Washington Nationals of the Eastern League, going 13-2 with a 0.74 ERA in 15 starts for the club.

After going 26-11 for Savannah of the Southern League, O'Day was purchased by the Washington Nationals (now a National League club) late in the 1886 season and made 6 late-season starts. He played parts of four seasons with the Nationals, leading the NL with 29 losses in 1888. He was acquired by the New York Giants late in the 1889 season and went 9-1 down the stretch for the team. He then won 2 games in his team's World Series win over the Brooklyn Bridegrooms.

O'Day jumped to the New York Giants of the Players League in Giants and went 22-13 for the team. He pitched in the minors through 1893 but never returned to the big leagues. 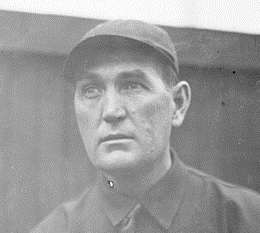 Even during his playing days, O'Day served as a substitute umpire on various occasions. He worked 75 National League games in 1895 and was hired full-time by the circuit in 1897. He was the home plate umpire in the first World Series game on October 1, 1903 and was also behind the plate for the famous Merkle Bonehead Play on September 23, 1908.

O'Day managed the Cincinnati Reds in 1912, leading the team to a 75-78 record and fourth-place finish before returning to umpiring in 1913. He then was the Chicago Cubs skipper in 1914, and the team went 78-76 and finished fourth with him at the helm. He returned to umpiring for good from 1915 to 1927. During that span, he was working at second base in Game 5 of the 1920 World Series, when Bill Wambsganss turned an unassisted triple play. Overall, during his umpiring career, he officiated in 10 World Series. He later served in an advisory position.

Election to Hall of Fame[edit]

O'Day's name was on the 2013 Hall of Fame ballot in which the Veterans Committee examined candidates from the pre-integration era. He was one of three persons elected on December 3, 2012, with his induction taking place the following July.