"They were both full of dynamite . . ." - the New York Times, talking about Joe Tinker and Johnny Evers

Joe Tinker was the shortstop of the famous Tinker to Evers to Chance double play combination. He was a respected shortstop, playing fifteen years in the majors, and also managed for four years, leading the Chicago team in the 1915 Federal League to the championship.

Spending the bulk of his career with the Chicago Cubs, he played in four World Series between 1906 and 1910. Later, as a veteran in 1912, he finished fourth in the MVP voting. 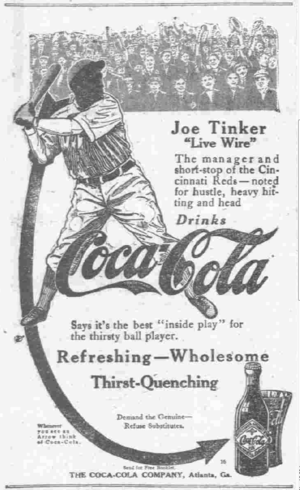 Tinker also did some early "celebrity endorsement", as shown in the Coca-Cola ad below from 1913.

He is one of three Hall of Famers to die on his birthday.

He was owner/manager of the Columbus Senators in the American Association (1917-1918) and Orlando Tigers in the Florida State League (1921).