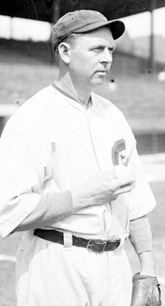 After narrowly losing the Federal League pennant in 1914, the 1915 Chicago Whales won it in an even closer race. Star outfielder Dutch Zwilling hit 13 home runs and drove in a league-leading 94 runs. Pitcher George McConnell won a league-high 25 games, and future Hall of Famer Three Finger Brown notched 17 victories. After the season, Whales owner Charles Weeghman was allowed to purchase the Chicago Cubs, and he took many of the Whales stars with him.