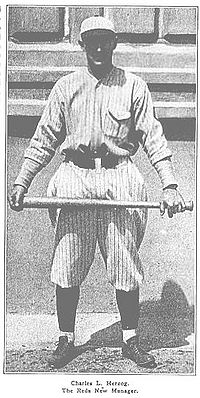 Buck Herzog, who played roughly equal amounts of second base, third base, and shortstop, spent thirteen years in the majors and served as a player-manager for three years. He played for the New York Giants three separate times.

In 1916, he set an unusual record by playing 98 home games during a season of 154 games. This happened because he was traded in mid-season from the Cincinnati Reds, whose schedule was front-loaded with a lot of home games, to the Giants, who were in the opposite situation. This record is unlikely to be broken, even if teams play more games today, as schedules are much more balanced between home and road games than they used to be.

Through July of 2007, he has the most major league at-bats of any player from the University of Maryland, where he attended in 1904 and 1905, the same time as Frank "Home Run" Baker.

He and Whitey Herzog are the only two major leaguers with the last name "Herzog".

When Herzog broke in with the Giants in 1908, he was universally (and incorrectly) believed to be Jewish based upon his very large and mishapen nose (the result of a childhood broken nose that was never properly set). The following quote is from Joe Vila in the September 17, 1908 edition of The Sporting News, notable for its compact writing style and the number of stereotypes it shoves into two sentences:

"The long-nosed rooters are crazy whenever young Herzog does anything noteworthy. Cries of 'Herzog! Herzog! Goot poy, Herzog!' go up regularly, and there would be no let up even if a million ham sandwiches suddenly fell among these believers in percentages and bargains."

Although Herzog apparently didn't care about the mistaken notion at first, he finally outed himself as "Dutch as sauerkraut" at the end of the season after being wished a Happy New Year by dozens of fans on Rosh Hashanah.

He worked for the B&O Railroad.