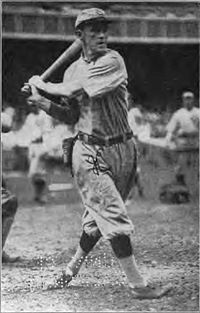 The nephew of Tom Evers and brother of Joe Evers, Johnny Evers was part of the famous Tinker to Evers to Chance double play combination with the Chicago Cubs of the 1900s and was known for his great glove and fiery demeanor. He and longtime middle-infield mate Joe Tinker did not speak to each other for several years as teammates.

Evers is supposedly the player who realized Fred Merkle didn't touch second base during the infamous game between the New York Giants and Cubs during the 1908 NL pennant run. The play went on to be known as Merkle's Boner, as it cost New York the pennant. The game officially ended in a tie and because of that the Cubs and Giants finished with the same record. The Cubs then defeated the Giants in a one-game playoff at the end of the season.

Evers was player-manager with the Cubs in 1913. In 1920, he was a Giants coach. After returning to the Cubs as manager in 1921, he spent the next two years across town as a Chicago White Sox coach before managing the team for part of the 1924 season. He later served as General Manager of the Albany Senators for a time.

"I never learned to shut the clubhouse door in a lost ball game. I took it home with me and played it over again all night." Johnny Evers.